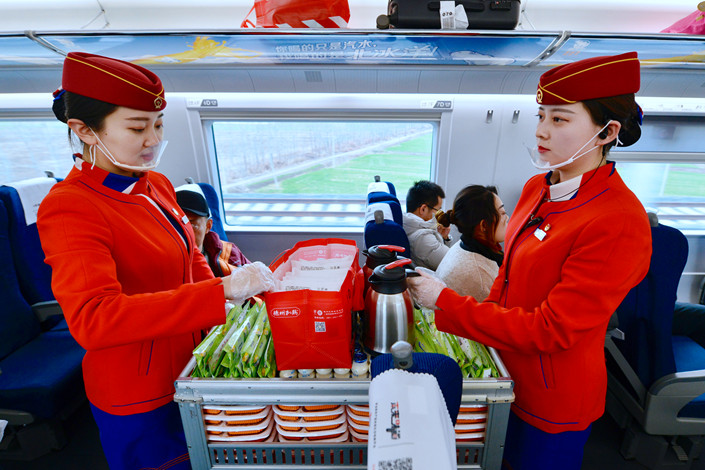 The Caixin China General Services Business Activity Index, which provides a snapshot of operating conditions in the country’s services sector, rose to 54.4 from 51.1 in February. The reading marks the strongest growth in the services sector since January 2018. A reading above 50 indicates expansion, while anything below it signals contraction.

The upbeat note in the services sector, coupled with expansion in the manufacturing sector, boosted the Caixin China Composite Output Index, which covers both manufacturers and service providers. The index rose to 52.9 in March, the highest since June and up from 50.7 in February.

“In general, China’s economic fundamentals recovered in March, with domestic and external demand as well as manufacturing employment improving. However, business sentiment has remained cautious, and inflation was subdued,” said Zhong Zhengsheng, director of macroeconomic analysis at CEBM Group. “More evidence is needed to determine whether the Chinese economy has stabilized.”

CEBM is a subsidiary of Caixin Insight Group, an affiliate of Caixin Global.

The gauge tracking the growth of new business in the services sector increased to its highest since January 2018 amid reports of new product offerings and stronger demand conditions, the survey showed. Growth in new export orders also picked up.

The growth of employment at services companies dropped from the previous month to a sixth-month low.

Prices charged by services providers increased for the sixth straight month, although at a rate slower than February’s figure, which was an eight-month high. The rise in input prices also eased, pointing to moderate inflation.

The gauge for business expectations edged up to a three-month high, with firms expecting stronger market conditions, new product developments and plans to expand capacity. But overall services providers’ confidence toward the 12-month outlook for business remained weaker than its long-run trend.

The services sector, which includes finance, real estate services, marketing, transportation and retailing, accounts for more than half of China’s gross domestic product and contributed to nearly 60% of economic growth last year. Also known as the tertiary sector, it is more labor-intensive than manufacturing, and policymakers count on it to create jobs.