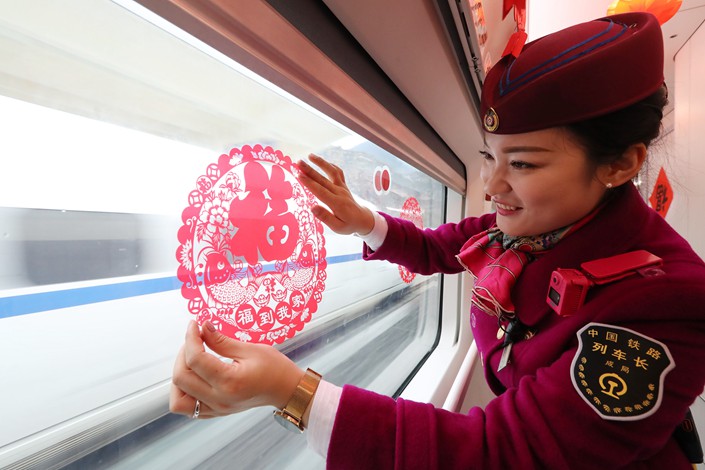 An attendant decorates the window of a train from Chongqing to Guiyang on Jan. 29, 2019. Photo: VCG

Expansion in China’s services activity slowed slightly at the start of this year, despite new export business increasing at the fastest pace in 14 months, a Caixin survey showed Sunday.

The Caixin China General Services Business Activity Index, which provides a snapshot of operating conditions in the country’s services sector, edged down to 53.6 in January from 53.9 the previous month, according to the survey. A reading above 50 indicates expansion, while anything below that points to contraction.

The drop, coupled with a fall in the Caixin China General Manufacturing Purchasing Managers’ Index amid weak domestic demand, drove down the Caixin China Composite Output Index to 50.9 in January from 52.2 the month before. The composite index survey covers both the manufacturing and services sectors, which account for roughly 30% and 50% (link in Chinese) of China’s gross domestic product, respectively.

“Service providers registered the fastest increase in new work for seven months,” the survey said. Among overall new business, new export business grew at the fastest rate since November 2017. This could be due to progress in Sino-U.S. trade talks, said Zhong Zhengsheng, director of macroeconomic analysis at CEBM Group, a subsidiary of Caixin Insight Group.

The employment gauge stayed in expansionary territory, and picked up after falling for two straight months, pointing to a faster expansion of headcounts at service providers, the survey showed. Beijing has recently issued preferential policies to stabilize the job market, including cash rewards for companies that lay off zero or few workers.

The gauge for business expectations inched down despite remaining in expansionary territory, pointing to services companies’ weaker confidence in their business outlook for the coming 12 months.

From a price perspective, the fall in the gauge for input costs was quicker than the one in the gauge for output charges, which helped ease pressure on services companies’ profit margins, Zhong said. Both gauges stayed in positive territory.

At the composite level, input costs faced by manufacturers and services providers continued to rise, but “the rate of inflation eased to the weakest in three years,” the survey said. “A number of panellists mentioned that reduced raw material prices had helped to ease cost pressures.”

Multiple economists have expressed concerns over China’s economic growth as cooling inflation is further evidence that the world’s second-largest economy will continue to lose traction.

The effects of government policies to support domestic demand and the development of the Sino-U.S. trade war will remain central to the prospects of China’s economy, Zhong said. Given that the government has refrained from enacting strong stimulus policies, “the downward trend of the economy may be hard to turn around for the time being,” he said.