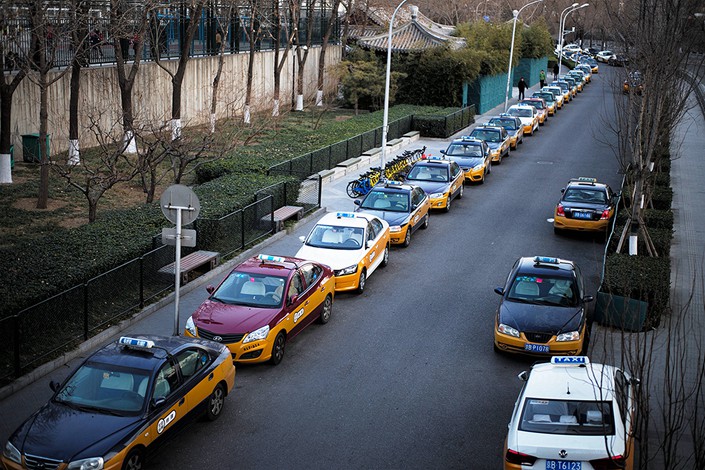 Taxis line up on a street near Deshengmen, Beijing, on Jan. 26. Photo: VCG

Expansion in China’s services activity continued to moderate in February as new business growth dipped to a four-month low, a Caixin survey showed on Tuesday.

The Caixin China General Services Business Activity Index, which provides a snapshot of operating conditions in the country’s services sector, dipped to 51.1 in February from 53.6 in January. A reading above 50 indicates expansion, while anything below that points to contraction. The reading marks the lowest growth in the services sector since October.

The gauge tracking the growth of new business in the services sector slowed to its lowest since October amid reports of relatively muted demand conditions, the survey showed. Growth in new export orders business also eased to a five-month low.

The growth in backlogs of unfinished work declined at the fastest pace since September 2015, with some firms citing greater efforts to clear incomplete orders, the survey showed. The growth of employment among services companies eased from the previous month.

The measurement for prices charged by service providers stayed in positive territory and rose to an eight-month high, coupled with a faster increase in input costs.

The slowing expansion of the services sector was a drag on the Caixin China Composite Output Index, which covers manufacturers and service providers. It fell to 50.7 last month from 50.9 in January. The reading was the lowest since October.

“In general, domestic manufacturing demand recovered significantly in February. However, with downward pressure on employment, expansion in the services industry slowed notably. Increased infrastructure investment may have prevented a sharper decline in economic growth,” said Zhong Zhengsheng, director of macroeconomic analysis at CEBM Group, a subsidiary of Caixin Insight Group.

The central government has encouraged more spending on infrastructure projects, allowing local governments to start selling bonds in January ahead of the normal annual schedule. Sales normally start in April.

Both services and manufacturing companies expect activity to increase in February due to new products, company expansion plans, greater investment and expectations that overall market conditions will improve, the survey said. However, the level of optimism has softened since January.

The services sector, which includes finance, real estate services, marketing, transportation and retailing, accounts for more than half of China’s gross domestic product. Also known as the tertiary sector, the services sector is more labor-intensive than manufacturing, and policymakers count on it to create jobs. More than 40% of the people who were employed worked in the services sector last year, the government’s data show.