By Yang Ge and Liu Shuangshuang 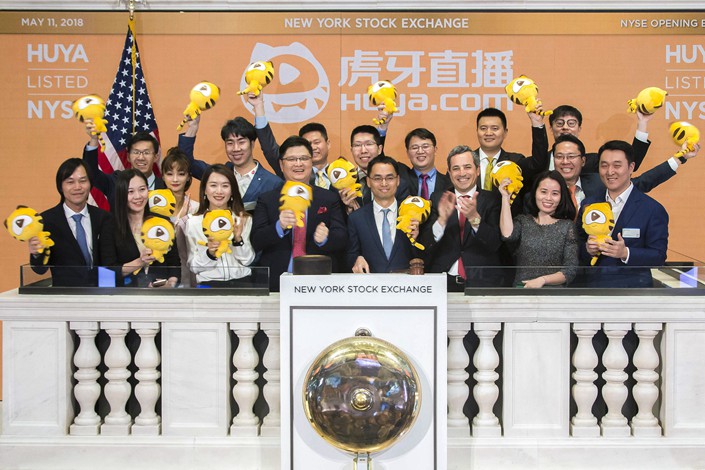 Under its plan, the company and an existing shareholder would sell up to 21.16 million of Huya’s American depositary shares (ADSs), according to its announcement on Monday. That would translate to total fundraising of about $534 million, based on the company’s latest share price, which included a 3% decline on Monday after the plan’s announcement.

Huya said it would use the funds to expand its content ecosystem, and also for overseas expansion, among other things. Underwriters of the deal include Credit Suisse, Goldman Sachs, Citigroup and Jefferies. The fundraising would be significantly larger than the $180 million that Huya generated in its initial public offering in New York last May.

Since then the shares have roughly doubled, including a nearly 50% gain so far this year amid a broader rally in China that has seen the mainland’s stock markets charge into bull territory. That same rally has helped to boost broader sentiment around Chinese stocks, helping other offshore-listed tech companies to raise big funds.

Also on Monday, broadcasting specialist Bilibili Inc. announced it raised nearly $900 million through a combination of selling additional ADSs and issuing $500 million worth of bonds. Two weeks ago news aggregator Qutoutiao Inc. also raised about $200 million through a share sale and also the receipt of a $170 million convertible loan from e-commerce giant Alibaba.

The biggest of the recent deals saw internet Titan Tencent Holdings Ltd. last week announce a plan to issue up to $20 billion in medium-term notes.

“The recent trend of Chinese tech companies looks like it’s tied to the recent rebound in stocks, but may also reflect some doubt that the good times will continue,” said a financial analyst who follows the Chinese internet, speaking on condition of anonymity due to company policy. “If the economy in China were to weaken, investors may be less willing to buy new shares, particularly in those companies which have yet to hit profitability, so the timing may be related to companies’ fears of that scenario happening.”

In Huya’s case, the company is trying to solidify its place in China’s ultra-competitive livestreaming industry, where it is one of the top players alongside rival Douyu. The industry was one of the hottest on China’s internet for several years, as users flocked to the medium to do everything from watching livestreaming newscasts to playing games with others in real time over the internet.

But now the sector has started to cool. Some 397 million Chinese were using livestreaming services at the end of last year, down by about 25 million from a year earlier, according to the China Internet Network Information Center, or CNNIC, the government agency that tracks internet usage. As the sector slows, consolidation claimed several major players last year, including one tied to No. 2 gaming firm NetEase Inc. Last month it claimed another high-profile player tied to Wang Sicong, the son of billionaire real estate and entertainment magnate Wang Jianlin.

Huya is still growing strongly in terms of revenue and is among the major industry players that is profitable. In its latest financial report it said its revenue doubled in last year’s fourth quarter to 1.5 billion yuan ($224 million), while its profit jumped 20-fold to nearly 100 million yuan.