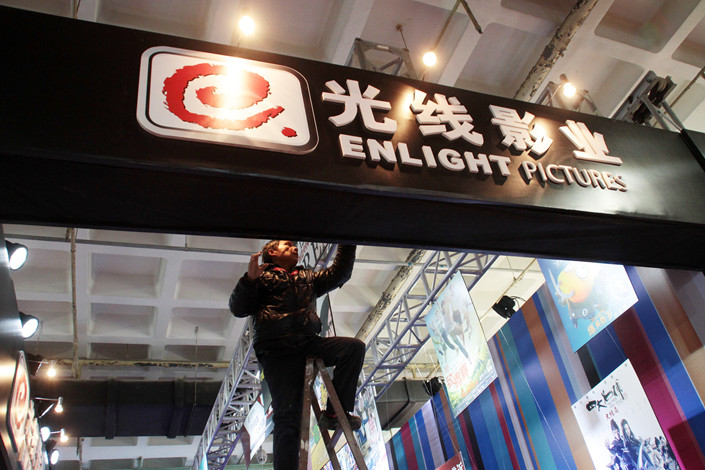 All three filmmakers citied company-specific elements as reasons behind their profit decline, often tied to the performance of individual projects. Photo: VCG

Three major filmed entertainment firms forecast big profit declines in the first quarter, with two saying they fell into the red, as the industry suffers under the weight of a broader slowdown after years of breakneck growth.

The downbeat forecasts sparked a Wednesday selloff for the sector, following the release of forecasts by Beijing Enlight Media Co. Ltd., Huayi Brothers Media Corp. and Zhejiang Talent Television and Film Co. Ltd. after markets closed the previous day. All three firms were down by at least 4% during the trading day, with Enlight, Huayi and Zhejiang Talent ending down 3.7%, 4.1% and 0.12%, respectively.

China has become one of the world’s most lucrative markets for filmed entertainment, propelled by a booming box office and vibrant online video sector. Both have flourished in recent years as the country’s economy boomed and an emerging middle class demanded high quality entertainment.

But a slowing economy has put a crimp on the sector, leading to a rare 8% decline in China’s box office in the first three months of the year, according to recently-listed movie site Maoyan.

“Honestly speaking, the industry as a whole isn’t doing too well,” said a financial analyst who covers the entertainment sector, speaking on condition his name not be used due to company policy. “But you can’t necessarily say that the big drop for these three companies was simply created by a broader industry cooling. There are also elements of project cycles.”

Enlight was the only company forecasting it would remain in the profit column. But it also forecast its profit would tumble about 95% to between 78 million yuan and 105 million yuan, versus a nearly 2 billion yuan profit in the same period a year earlier, according to its announcement.

All of the firms citied company-specific elements as reasons behind their decline, often tied to the performance of individual films and TV shows in a sector where such performance can vary quite widely. Enlight also cited higher costs, without providing any specifics.

Chinese authorities have been clamping down on tax evasion by the industry, following the high-profile detention of A-list actress of Fan Bingbing last year on such suspicions by her company. That crackdown sent a chill through the industry, with the National Radio and Television Administration registering 11% fewer films and TV series in last year’s third quarter versus the second quarter not long after Fan’s release. Last September alone, the registered number of films and TV series was 286, down from an average of 400 in the earlier months of the year.