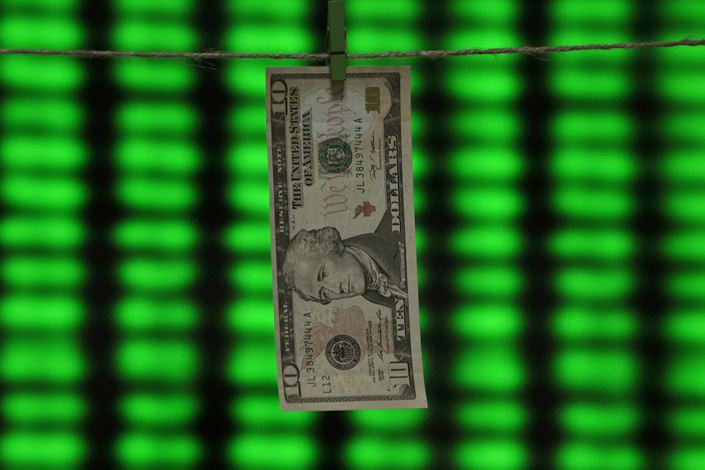 Tewoo “is another deep (debt) hole in Tianjin,” a source close to the city’s government told Caixin. Photo: VCG

The warning highlights market jitters about the solvency of the city’s state-owned enterprises, which have been hit by a wave of defaults, bankruptcies and corruption scandals in recent years.

Fitch kept the firm’s long-term foreign-currency issuer default rating at BBB, or two notches above junk. Placing a company on negative watch indicates the rating could potentially be downgraded or remain at its present level, according to Fitch’s rating definitions.

Fitch has also put a BBB rating on the Fortune 500 company’s senior unsecured notes and the BBB-rating of its $450 million senior perpetual capital securities is on negative watch, it said in a statement this week.

The ratings action “reflects the potential deterioration in Tewoo’s access to funding in the short to medium term following market rumors of a liquidity stress,” the statement said.

According to Bloomberg data, Tewoo has six outstanding offshore bonds, including one $300 million note due in December. Holders of Tewoo bonds include J.P. Morgan, Blackrock and Deutsche Bank.

“Even a temporary curtailment of access to liquidity may disproportionately affect the operations of a commodities trader like Tewoo,” it said.

Still, Fitch acknowledged that the company’s management has insisted that the firm does not need liquidity immediately and none of its banks has classified any of its loans as nonperforming.

Tewoo is wholly owned by the Tianjin State-owned Assets Supervision and Administration Commission (Tianjin SASAC). Its main businesses are trading commodities such as metals, fuel and minerals, as well as logistics, according to the company’s website. However, Caixin reported (link in Chinese) in February 2014 that many government-backed commodities traders, including Tewoo, have been taking advantage of their easy access to bank loans to focus on providing financing for steel buyers or steelmakers, deals that it earned commissions on.

This business model plunged Tewoo into trouble after Bohai Steel Group Co. Ltd., the parent of one of its close business partners, fell into a debt crisis and collapsed. The Tianjin government-owned steelmaker won court approval in January to go into bankruptcy reorganization, a process aimed at helping creditors recover a portion of the company’s 243 billion yuan ($36 billion) in debt and revive the business, although many remain skeptical about its chances.

Tewoo, mired in the Bohai Steel debt problem, has accumulated 186.5 billion yuan in total liabilities by the end of last June, accounting for 76.2% of its total assets, according to figures from Chinese financial data provider Wind.

Tewoo “is another deep (debt) hole in Tianjin,” a source close to the city’s government previously told Caixin.

Fitch said that Tianjin SASAC announced a plan in January that included capital restructuring to reform its state-owned enterprises (SOEs). Tewoo received the reform instructions earlier this month and told Fitch that the process will require it to separate existing bank loans for each subsidiary undergoing restructuring, with terms of the loans currently being renegotiated.

In a statement on Jan. 4 (link in Chinese), Tianjin SASAC said it was launching mixed-ownership reform of 100 of its SOEs this year. Authorities encouraged investors like foreign companies, private firms and equity funds to participate in the SOEs’ stock sales and share placements, according to the statement.

A statement (link in Chinese) posted on Tianjin SASAC’s website in May showed that the authorities plan to introduce one to two strategic investors to take a total of 24% of Tewoo’s stakes, with the commission retaining the remainder.

Tianjin’s SOEs have been hit by a slew of scandals in recent years. Most of the top management of Tianjin Real Estate Group Co. Ltd., including its chairman, fell under investigation by the municipal anti-graft watchdog last year. The property developer, also controlled by Tianjin SASAC, had more than 197 billion yuan in total debt at the end of June 2018, account for 97% of its total assets.

The head of Tianjin Binhai Rural Commercial Bank Corp., a rural commercial bank in the city, committed suicide in May after the national corruption watchdog began looking into the lender. The rural bank was one of the three largest creditors of Bohai Steel and in early 2016 was rocked by a 10 billion yuan loan default by the steelmaker.