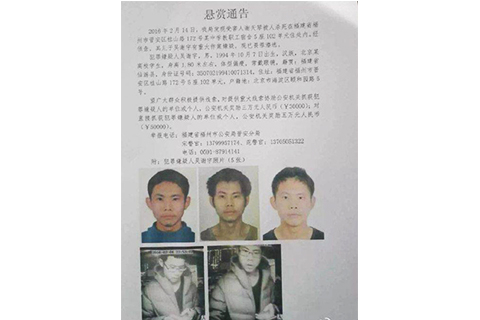 A notice provided by Fuzhou police describing Wu Xieyu, the main suspect in the killing of his mother, Xie Tianqin

After three years and nine months at large, a former Peking University student who shocked the country for allegedly killing his mother and hiding her body at home for months has finally been arrested.

Wu Xieyu, a 24-year-old from southeastern China’s Fujian province, was arrested on April 21 at an airport in southwestern China’s Chongqing, The Beijing News reported on Thursday night.

Police in Fujian declined to reveal details of the case, telling Caixin on late Thursday that they are still investigating it.

When he was arrested, Wu was carrying more than 30 ID cards he had bought online, the Beijing News report said. He had been wandering around within China for the past three years, the report said.

Caixin reported in 2016 that Wu had borrowed 1.44 million yuan from his relatives and friends, saying he was going to study at the Massachusetts Institute of Technology, and that his mother Xie Tianqin had also moved to the United States to live with him.

Xie’s body was found by police on Feb. 14, 2016 in her home in Fuzhou city, about seven months after the murder took place, sources close to the investigation told Caixin. The body was wrapped carefully with plastic, and activated charcoal, which absorbs odors, had been placed inside the wrapping.

Police issued a wanted notice on March 3, 2016, saying Wu had fled out of fear of punishment.

Wu’s former classmates at his high school and Peking University — one of the country’s top institutions — described him as “nice” and “always ready to help.”