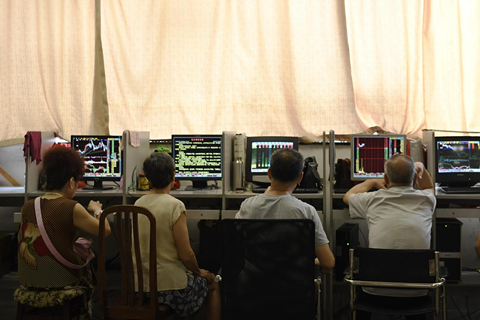 Four companies traded on the Shenzhen and Shanghai markets face a higher risk of being delisted after they reported negative net assets for 2018 and trading in their shares was suspended Friday. One of the four is a unit of the fugitive tycoon Jia Yueting’s once-highflying technology conglomerate LeEco.

The 2018 reports triggered the trading suspensions. The Shenzhen and Shanghai stock exchanges will further decide on whether to suspend the listings within 15 trading days, according to exchange rules. A listed company can experience multiple stages for delisting — suspension, resumption, compulsory or voluntary termination of listing ― under rules of both exchanges.

Suspension of listing can be triggered under multiple circumstances, including when the auditor reports a disclaimer of opinion or adverse opinion after the company has been issued a delisting risk warning, or when the audited net assets at the end of the most recent fiscal year are negative after the company has received a delisting risk warning.

The negative net assets of the four companies largely reflect losses in major operating businesses, debt issues and massive operations using debt-backed investments during the previous bull market period, a source in the auditing industry told Caixin. The four also faced lawsuits and had part of their assets or bank accounts frozen because of unpaid debts.

LeEco’s founder, Jia Yueting, has remained outside China since the summer of 2017, leaving behind billions of yuan in debts, which reached 11.9 billion yuan at the end of 2018. Jia has also been blacklisted as a debt defaulter by a Chinese court. He holds a 24.43% stake in Leshi, most of which have been frozen or pledged as collateral, Leshi’s annual report showed.

Shareholders are scrambling to get out, with Leshi's stock plunging by the daily 10% limit for three days in a row before the suspension. On Thursday, the last trading day before the suspension, Leshi’s stock closed at 1.69 yuan ($0.25) per share, a tiny fraction of the stock’s value of 40 yuan or so in 2015.

Among the four companies, Protruly Vision, an electronic vision products maker, posted the worst negative net assets of 5 billion yuan at the end of 2018. It had a net loss of 1.7 billion yuan in 2018, according to its annual report (link in Chinese). The auditor issued a disclaimer of opinion for the 2018 report.

Liquor and wine maker Gansu Huangtai posted a net loss of 95 million yuan in 2018, the third year in a row of red ink, the annual report (link in Chinese) said. At the end of last year, the company had negative net assets of 238 million yuan, compared with negative 143 million yuan at the end of the previous year, the report showed. The China Securities Regulatory Commission has been investigating the wine maker and some of its former senior executives for alleged noncompliance with information disclosure rules and related illegal activities.