Q&A: U.K. Chancellor Describes How Britain Can Be a Partner on the Belt and Road

By Qing Ying and Ren Qiuyu 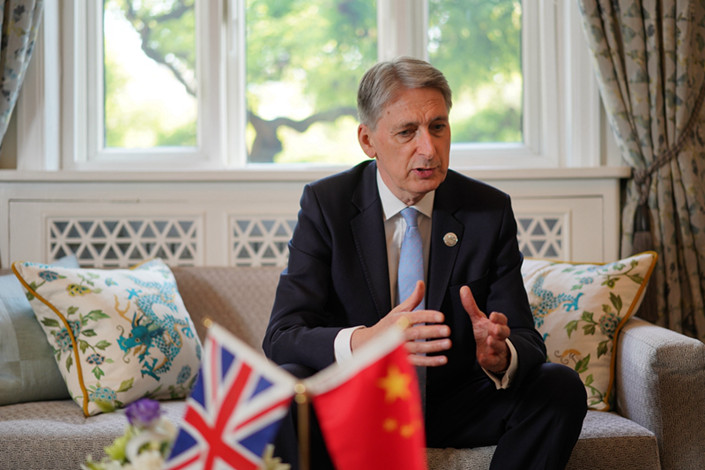 Philip Hammond, special envoy of the British prime minister and chancellor of the exchequer, speaks to Caixin on April 26. Photo: Cai Yingli/Caixin

During the Belt and Road Forum for International Cooperation in Beijing last month, British Chancellor of the Exchequer Philip Hammond affirmed the United Kingdom’s commitment to the initiative, which he said has “tremendous potential to spread prosperity and sustainable development.” It was the second time Hammond has attended the forum as a representative of the British government.

Since Hammond first attended the forum in 2017, Sino-British ties have been strained despite trade growth and greater exchanges. In 2018, trade in goods between the two countries surpassed $80 billion for the first time, and Chinese direct investment in Britain the same year was up 14% from the previous year. The number of Chinese students studying in the U.K. and the number of British students studying in China both increased, and there are now 168 flights per week connecting the two countries. However, tension over British-U.S. naval drills in disputed waters in the South China Sea and the uncertainty of a yet-to-be-determined Brexit deal have caused some uncertainties in the relationship.

Yet the U.K. is keen to bolster its involvement in the Belt and Road Initiative (BRI). In his speech at the forum, Hammond said that the U.K. in April had launched a three-year China Infrastructure Program that will work with China to improve infrastructure in Africa and Asia. In May 2018, he appointed Douglas Jardine Flint, former chairman of HSBC, as a special envoy to the Belt and Road Initiative representing the U.K. Treasury. Hammond hopes that this is a channel that will allow British financial services, capital markets and expertise to participate in BRI projects by raising funding on private markets and supporting their design.

During his visit to China, Hammond met with People’s Bank of China Governor Yi Gang, Vice Premier Hu Chunhua and Premier Li Keqiang. Hammond and Hu agreed that the next round of the China-U.K. Economic and Financial Dialogue will be held in London in June.

Caixin sat down with the British finance minister to discuss his experience at the Belt and Road Forum, the U.K.’s role in the initiative, Britain’s security assessment of Huawei’s 5G network — “the U.K. will make its own decisions” — and U.K. public opinion toward China. Below is an edited excerpt from the exclusive interview.

Caixin: What was your experience attending the Belt and Road Forum for International Cooperation for the second time? The atmosphere must have been different from the last time you attended in 2017. What has changed?

Hammond: Well, a lot has happened in two years and I just said in the plenary session, it’s good to come back after two years and have a chance to take stock on what has happened and to discuss how the project is going to be taken forward over the next couple of years. Some things have changed.

So, Finance Minister Liu Kun (on April 25) made clear that in the next phase, private finance will have to provide much more of the financial support to the Belt and Road.

I thought President Xi in his speech (on April 26) made a very important what I’ve called a “triple pledge,” where he committed China to, one, the highest standards of international governance on Belt and Road projects to social inclusiveness in the investments and to the highest environmental standards. Two, he repeated China’s commitment to free trade and multilateralism, which is very important to the U.K. We’re strong supporters of those principles. And three, of course, also very important to us, he made a commitment to further reform and open up of China’s economy, again, vitally important to the U.K.-China partnership.

For me, it was worth coming to Beijing just to hear President Xi make those three commitments in his speech this morning.

What are the U.K.’s priorities in collaborating with China on the BRI?

We think that Britain is a natural partner for China in BRI. Why do I say that? Because our two economies are very different and very complimentary. China has large pools of capital available to invest; it has great strength in manufacturing, heavy engineering, construction.

The U.K. economy is quite different. We don’t have large-scale construction. We don’t have much heavy engineering anymore. What we have is a very sophisticated services economy. So financial engineering, financial services, technical, legal, professional services, project design and management, project implementation skills. And it’s obvious the two can fit together to help to deliver the BRI program in the future.

And (on April 25), I agreed with Vice Premier Hu Chunhua that the Economic and Financial Dialogue will meet in London in June, and we agreed a long agenda of items that we will seek to progress during that meeting. Key among them will be the institutional structures to allow London’s capital markets and London’s technical expertise to be deployed in support of the next phase of BRI projects, raising the funding on private markets and developing the design and documentation for those projects. So I’m very optimistic that we will find a good basis here for a strong partnership, because the two economies are entirely complimentary.

Are there any red lines for Britain in BRI cooperation?

The red line for us has always been that if Britain is going to endorse and become heavily involved in BRI projects, we have to be confident that they’re being delivered to the highest international standards, that they’re being delivered in a way which is for the benefit of the recipient countries, as well as the sponsor countries, and that they are designed in a way to protect environmental standards.

As I said, President Xi has already made those commitments (in his speech at the BRI Forum). What we now need to do is work with our Chinese counterparts to turn the president’s commitments in his speech into practical operating realities.

What we know and understand from our experience of China is that the messages come from the highest level, and then everybody in the system works to implement those decisions and make sure that they are operationalized. So we’re very excited about the commitment that’s been made and the prospects, the opportunities that open up for us to collaborate together on delivering projects.

To what extent can the U.K.’s deeper involvement in BRI help the whole initiative to enhance its image in the Western world?

Our ambition is to create a defined asset class of Belt and Road investments, equity investments and bond investments that can be traded and that commercial investors will regard as being validated by the certification that they get. We think London can play an important role in raising the standard of the projects and ensuring through that validation that we can raise the huge amounts of capital, trillions of dollars of capital, that they’re going to need to deliver the full ambition of the Belt and Road project.

Do you see any possibility of signing a memorandum of understanding with China on BRI?

Possibly, we can look at the possibility of an MOU when we meet in June. We haven’t ruled it out, but we don’t think that an MOU is necessarily the only way in which we can formulate our cooperation. So we’ll certainly look at the possibilities. And we’ll work with the Chinese side to see how best we can create a framework for that formalized cooperation in the future.

To what extent will the doubts of some traditional British allies affect the U.K.’s decision to engage in scientific and technological cooperation with China? For example, whether to allow Huawei to participate in the U.K.’s 5G network construction.

On the question of Huawei, obviously, I can’t talk about a review which hasn’t yet been published. It’s still confidential, but we will publish it in due course. I’ve been very clear that this is a very important step for us because developing our 5G communication infrastructure for the future is going to underpin the digitization of the U.K. economy for decades to come. And we have to get it right.

That means we want to use partners who offer us cost-effective solutions. But we also need partners to offer us secure solutions. And we will work with our partners to make sure that we build a network which is both cost effective and secure. We have a very well-established arrangement with Huawei at the moment in the U.K. We recently published a report on our cooperation with Huawei, and we made some criticisms of the company’s security arrangements, the security systems that they build into their equipment. And the company has responded very positively and confirmed that it is willing and able to address those concerns and ensure that those security defects are corrected for the future. So we’re very pleased about that.

As far as our allies are concerned, of course, we always look carefully at what other countries are doing, see what we can learn from how other countries work. And we always listen to our closest partners. Of course we do. But in the end, the U.K. will make its own decisions about how best to protect its security and to deliver the best solutions to underpin U.K.’s economic growth in the future.

On this visit to China, you have restored confidence that this is the “golden era” for China-U.K. relations. How does public opinion in the U.K. understand and interpret the concept of the “golden era”?

People in the U.K. understand very well that China is a huge and fast-growing market. Like everybody in every country, what people think about is their jobs, the security of their jobs and the prosperity of their families. The message we need to deliver is that growing trade is good for jobs and good for prosperity. We need to challenge those who tell us that trade is bad for jobs and bad for prosperity. I don’t believe that. I believe that free trade and multilateralism is good for the world and it’s not “beggar thy neighbor.” It is good for all of us that we have more trade and more opportunities to invest in each other’s economies.