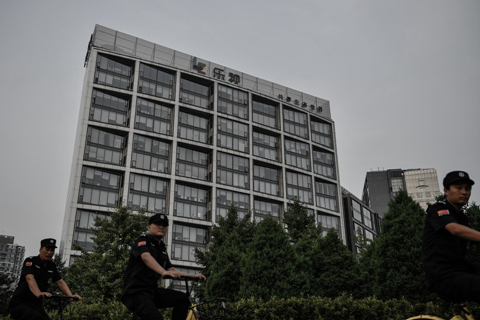 The listing of embattled tech conglomerate LeEco’s Shenzhen-listed unit will be suspended from May 13 after its trading was halted for eight days.

The Shenzhen Stock Exchange decided to suspend the listing of Leshi Internet Information & Technology because the company triggered a trading suspension under exchange rules, the bourse said Friday in a statement.

The move was expected since Leshi April 26 reported negative net assets in its annual report, a key indicator to trigger a trading suspension and possibly an eventual delisting. On its last day of trading April 25, Leshi’s shares fell to 1.69 yuan ($0.25), leaving its market value at 6.74 billion yuan, down from a peak in 2015 of 170 billion yuan.

A listed company can experience multiple stages for delisting ― suspension, resumption, or compulsory or voluntary termination of listing ― under rules of the exchange.

Leshi may face compulsory delisting if its 2019 annual report fails to meet regulatory requirements for resumption of listing, such as turning in another year of net loss and negative net assets.

After suspension, the company would have to issue its annual report on time the following year and have an audit report issued without any reservations before it can apply to resume trading.

Leshi’s founder and largest shareholder, Jia Yueting, has fled China to the U.S. and has not returned since the summer of 2017, leaving behind debts that reached 11.9 billion yuan at the end of 2018. Jia has been blacklisted as a debt defaulter by a Chinese court. He holds a 24.43% stake in Leshi, most of which has been frozen or pledged as collateral, Leshi’s annual report showed.

Leshi said in a regulatory filing April 29 that it has received notices from the China Securities Regulatory Commission (CSRC) saying the regulator has launched a formal investigation into Leshi and Jia for suspected information disclosure violations. The company said it will cooperate with the investigation and disclose information as needed.

There is speculation that Jia may be forced to return to China because of the investigation.

At a briefing discussing the company’s annual report, Leshi Chairman Liu Shuqing said Jia has agreed to cooperate with the investigation, but the company has not received any itinerary from its founder.

Leshi also said there’s no detailed plan for debt or asset restructuring and Jia hasn’t come up with a debt payment timetable.

The formal investigation could mean a faster delisting for Leshi, people close to the regulator told Caixin.

If Leshi is found with serious violations that trigger a delisting, the one-year suspension period will be shortened to six months, during which the company cannot resume listing even after rectification and compensation measures are taken, according to new delisting rules released in November.

During the suspension of listing, Leshi’s operation will continue as normal, Liu said.