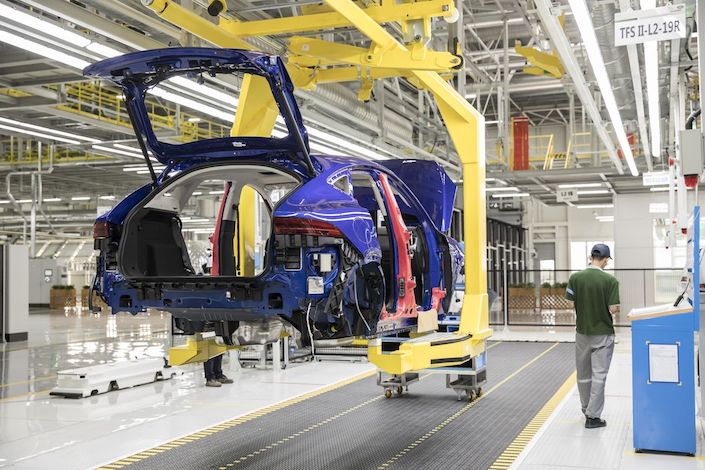 A Jaguar E-Pace compact sport utility vehicle (SUV) moves along a conveyor on the production line at the second phase of the Chery Jaguar Land Rover Automotive Co. plant in Changshu. Photo: Bloomberg

Manufacturers are “fighting for volume” after the world’s biggest automotive market posted its first annual slide in demand in more than two decades, Speth said in an interview Wednesday. That makes it all the more vital that JLR establish its products at the top end of the market, he said.

“We want do it in the premium business way,” he said. “The market is going down, but last year the premium market was nevertheless stable.”

The U.K. maker of sports cars and luxury SUVs is overhauling its Chinese dealer network because it provides insufficient exposure to the country’s biggest cities. The February writedown pushed JLR owner Tata Motors Ltd. to a record loss. Speth said Wednesday that Tata will provide an update when it reports results Monday, but that there’s no quick fix for the issue, and he isn’t prepared to make unlimited sacrifices to stoke volume.

“Dealer networks don’t change at the push of a button,” he said on the sidelines of an FT conference in London. “We do not want to push vehicles in the market then have huge stocks that get older and older. We don’t run for the sake of running. We want to have profit, not just volume.”

JLR’s China sales fell more than a third in the nine months through December and have continued to slide, declining 46% last month while the country’s car retail market as a whole shrank 16.6%. The company is cutting 5,000 jobs as part of a 2.5 billion-pound ($3.2 billion) savings plan as demand is also hurt by confusion around Brexit and a U.K. clampdown on diesel autos.

Adding to the turmoil, it’s reportedly being targeted for takeover by Peugeot owner PSA Group. Speth said he hasn’t spoken with PSA boss Carlos Tavares about any transaction, and can’t confirm whether there’s been any discussions between Mumbai-based Tata and the French firm.

“Car companies always talk about technical things or whatever,” he said. “We are talking to everybody. I definitely cannot speak for Tata. I’m a normal employee in this empire and therefore I cannot make a statement.”