What Huawei Founder Told the Chinese Media This Week 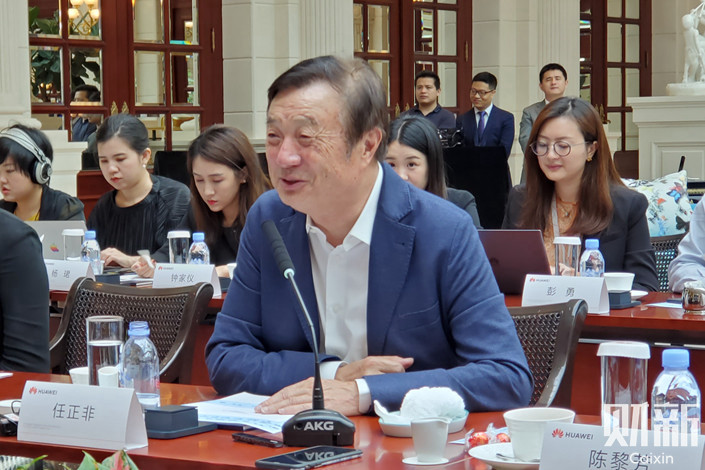 Ren Zhengfei, founder and CEO of Huawei, speaks to media at the company's headquarters in Shenzhen, Guangdong province on May 21. Photo: Zhang Erchi/Caixin

At the height of China-U.S. trade tensions, the U.S. government has put Huawei on a blacklist restricting the Chinese telecom giant from purchasing U.S. components.

The situation prompted some to wonder whether Huawei’s fate would echo that of another Chinese telecom company, ZTE Corp., which has been in recovery mode after it ran afoul of the U.S. government last year for selling U.S.-made products to Iran in violation of American sanctions, and copped a $1 billion fine.

The once-low profile Huawei Technologies Co. Ltd. founder Ren Zhengfei stepped out on Tuesday in the latest of a series of group press interviews — this time with domestic media — to offer his side of the story on Huawei’s strategy in the face of U.S. sanctions, whether the company can become technologically self-sufficient, and how politicizing Huawei’s business with blind patriotism could hurt the company as well as China.

The following is an abridged version of the points he made over an interview more than two hours in length.

The 90-day reprieve is meaningless

The 90 days means little to us. We are ready. We are grateful for U.S. companies. In the past three decades, U.S. firms have accompanied our growth and contributed a lot, they taught us how to walk.

In this moment of crisis, some U.S. companies have shown their integrity and conscience.

After we were put on the Entity List, the U.S. companies have to seek government approval to sell their products to Huawei.

The media should not blame U.S. companies. Please speak more for them. You should blame the U.S. politicians.

U.S. companies share their fate with us: we are but market entities.

We can’t isolate ourselves from the world

We always need chips from the U.S. We will not exclude the U.S. and try to grow by ourselves. In peace time, we have been buying half our chips from U.S. companies, and using half from our own. We should not isolate ourselves from the world, we should integrate with the world.

Europe will not follow the U.S. Every country has its own interests. The U.S. has no power to ask everyone to follow it.

We’ll meet with the U.S. at the peak

We have sacrificed individuals and families only for the goal to stand at the top of the world. Sooner or later, conflict with the U.S. was inevitable. We must be prepared for the showdown with the U.S. However, in the end, we’ll need to embrace each other, because we want to do something for human society.

We can certainly continue to serve our customers. Our production capacity is still big, and not impacted much because of being included in the U.S. Entity List. Our global business bid continues. Our growth will slow down, but not as much as some imagine.

We have some marginal products that have no backups, they may be affected (by the blacklisting), but these products will phase out sooner or later. There won’t be much impact in our advanced areas, at least 5G technology.

In 5G, fiber transmission and some other areas, Huawei will still lead the world in technology for years.

Reports on the internet said Infineon has stopped delivering their products. It’s not true.

It is wrong to say that purchasing Huawei’s products equals being patriotic. Huawei products are just commodities. Use them if you like them … don’t link that with politics.

Such populism will harm the country.

China’s reform and opening-up are late

The future of a country lies in opening-up. I’m so happy to see that China vowed more opening-up and reforms after the recent China-U.S. trade talks. Actually we are still a bit late to open up and reform. We had promises when China joined the World Trade Organization. If we materialize them earlier and contribute more, we can make more friends.

We won’t allow outside capital to enter this company. The company has made a lot of money … we can spend some money on strategic (research), we support universities and scientists.

We don’t want outside capital: the greedy nature of capital will stop us from realizing our dreams.