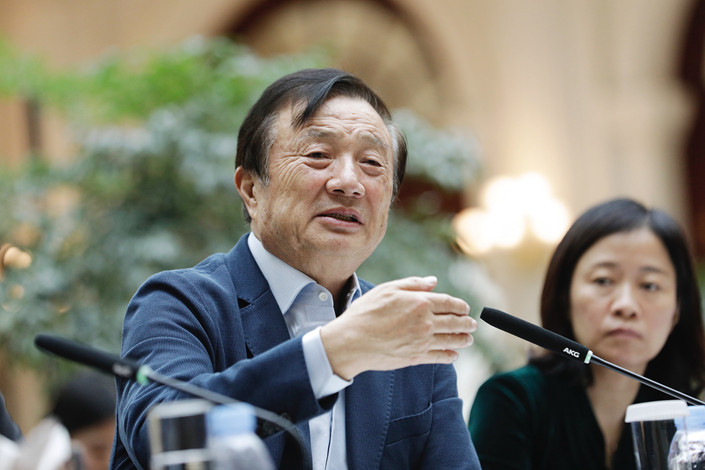 Huawei Technologies Co. Ltd. founder and CEO said Chinese people should not resort to “harmful nationalism” in view of the company’s ongoing spat with the Trump administration, as he shrugged off a 90-day reprieve offered by the U.S. government ahead of its blacklisting.

“It is wrong to say that purchasing Huawei’s products equals being patriotic … don’t link that with politics,” said Ren Zhengfei in a group interview in Shenzhen on Monday with multiple Chinese media, including Caixin. “At Huawei, we won’t resort to nationalism and populism, because that is harmful to our country,” he said.

The comments came after the U.S. Commerce Department last week added the Chinese telecom giant and 68 non-U.S. affiliates to a list of companies required to obtain U.S. government approval to purchase critical components and services from American firms.

U.S. prosecutors in January indicted Huawei on 10 counts including trade theft, fraud and obstruction of justice. One of the company’s executives has been detained in Canada for possible extradition to the U.S. — Meng Wanzhou, who is Ren Zhengfei’s daughter.

Amid an intensifying trade war between Beijing and Washington, the recent targeting of the company stirred some in China to attempt to boycott U.S. firms in support of Huawei.

“Don’t point your fingers at U.S. firms. They have to obey the law — as required in the Entity List — because the U.S. is a country ruled by law,” said Ren, adding that U.S. politicians should take the blame.

In what was seen as a reprieve for the Chinese company, the U.S. Commerce Department issued a license on Monday allowing Huawei to continue to trade with U.S. firms for the next three months. The temporary license will only apply to products used to maintain existing networks and provide software updates to existing Huawei handsets. The Commerce Department will evaluate whether to grant companies exceptions after the 90-day period.

Ren said the measure had “little meaning” to Huawei, and his company had anticipated future conflict with the U.S. and the company had been working on a backup plan to develop its own chips for many years. He said Huawei had long prepared for clashes with the U.S.

“We have sacrificed individuals and families only for the goal to stand at the top of the world,” Ren said, adding that with such a goal, conflict with the U.S. was “inevitable.”

Despite this, Huawei will continue purchasing chips from U.S. companies and selling Huawei products to U.S. clients, he said, despite mounting restrictions from the U.S. government.

Frozen business ties with Google are expected to hit Huawei particularly hard. The world’s second-largest smartphone-maker has embedded Google’s Android operating system on phones sold in markets outside China. If Google fully implements the U.S. government order, Huawei will only have access to the public version of the Android operating system, meaning Huawei phones could lose access to proprietary apps and services such as the Google Play app store, Gmail and YouTube.

Ren said today that Google has been trying to persuade the U.S. government to “solve the problem,” and also said his company was working on a “rescue solution,” but did not elaborate.

In an emailed statement, a Google spokesperson did not respond directly to Ren’s comments but said: "Keeping phones up to date and secure is in everyone's best interests and this temporary license allows us to continue to provide software updates and security patches to existing models for the next 90 days."

Right now, Huawei relies heavily on outside suppliers for components that go into everything from its smartphones to its network base stations. The company has said it imports about 30% of its components from U.S. firms, with those components worth about $11 billion annually.

Zhao Runhua contributed to the story.

A previous version of this story misstated the number of Huawei’s non-U.S. affiliates that the U.S. Commerce Department last week added to a list of companies required to obtain U.S. government approval to purchase critical components and services from American firms. There were 68.