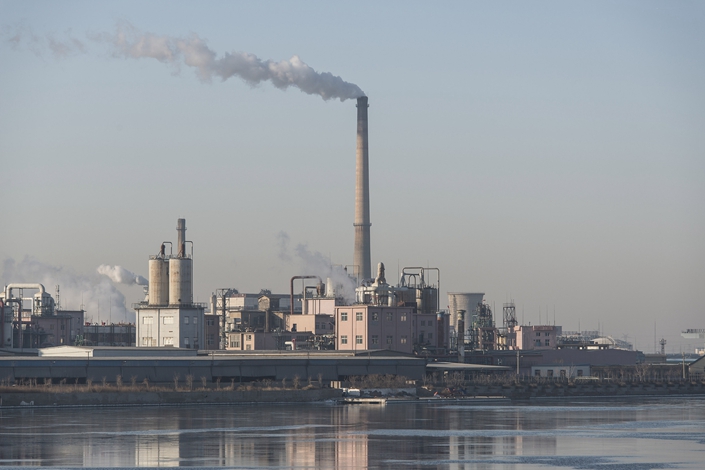 The Dagu Chemical Plant on the southern bank of the Haihe river in the northern city of Tianjin in February 2016. Photo: VCG

A lack of coordination continues to blight China’s efforts to relocate chemical plants from populated or environmentally sensitive areas into specialized industrial parks, with only one-fifth of enterprises ordered to move in 2017 having done so, an inspector revealed.

After a sweeping investigation of chemical companies and enterprises across the country in 2017, the Ministry of Industry and Information Technology (MIIT) drew up a list of enterprises that must either relocate to industrial parks or shut down, with relocation to be completed by 2020.

Yet by the end of last year, just one-fifth of enterprises on the list had actually relocated, Han Jingyou, an investigator at the MIIT’s raw materials department revealed Thursday at an industry event in Hangzhou, East China’s Zhejiang province.

Part of the problem is that industrial parks set minimum investment requirements, Han said. Yet many smaller chemical companies work in niche areas of production and struggle to meet the required levels. Han suggested that provincial governments set up specific parks to cater to their needs. At present, East China’s Shandong province has 11 specialized parks reserved for smaller companies.

In his speech, Han added that many companies that have already relocated to industry parks may have to move yet again, as the MIIT has found many that were approved for development several years ago have deviated from the original plans, often moving closer to residential areas or failing to meet other safety standards.

The environmental and safety risks posed by China’s scattered smaller chemical plants have long caused consternation for the MIIT. Safety concerns gained nationwide prominence after a devastating chemical blast at the Jiangsu Tianjiayi Chemicals fertilizer and pesticide plant in the eastern province of Jiangsu killed at least 78 in March.

Jiangsu and Shandong, China’s major chemical producers, have intensified their efforts to relocate chemical plants and improve safety standards in the wake of the accident, with 400 chemical enterprises being shut down in Shandong since March alone. Jiangsu announced plans to move plants away from populated areas and the Yangtze River earlier this month.

China is home to 676 chemical industry parks, but almost one-third are yet to establish an adequate safety supervision platform, and two-thirds have no hazardous waste treatment facilities, Xiao Wenjia, the head of the petrochemicals department at the MIIT, said at an industry event in April.