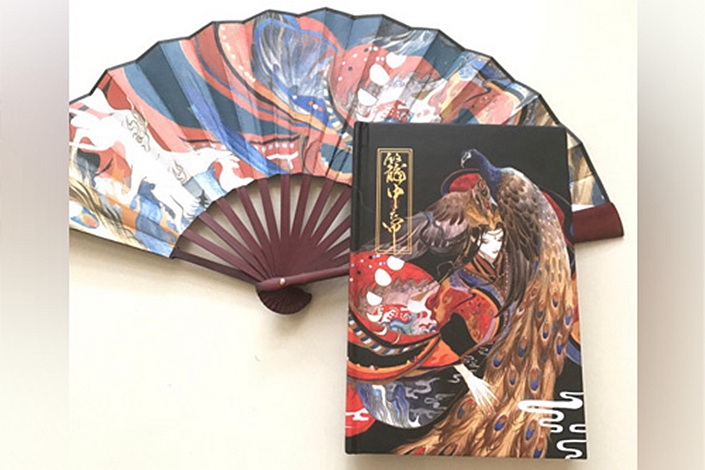 Tang Xin created merchandise, including a folding fan, to accompany her book, "The Caged Emperor." Photo provided by interviewee.

Offline, she was a graduate student in the central Chinese city of Wuhan. She majored in animation and design, and lived with her parents, who encouraged her lifelong love of books and art.

Online, Tang was a minor celebrity in a world her parents knew little about. She wrote serialized, novel-length works of “danmei” literature, a genre that features romanticized and sometimes sexually explicit fantasies of gay love that is produced and consumed primarily by a female audience.

Tang had around 110,000 followers on the Chinese social media platform Weibo, and was in some ways a literary pioneer. Her first novel, “Desharow Merman,” was published on online literature portal Jinjiang Literature City in 2014, and was one of the first danmei works to feature a romance between a human and a merman.

At the end of 2017, though, Tang’s online life came to a screeching halt.

Tang, who wrote her books under the pen name “Mr. Deep Sea,” got on a high-speed train for Shanghai on Dec. 7, 2017. She planned to attend a comic convention at the Shanghai New International Expo Center, where she would hold a book signing session for her novels.

At the time, Tang was posting regularly about her life on Weibo. She was also updating her latest serial on the Jinjiang portal, “Merman Bait,” nearly every day, and had just completed final revisions for a new edition of “The Caged Emperor,” which was about to go to print.

“The Caged Emperor,” a historical romance set in an ancient court, would be released alongside merchandise including postcards, bookplates and folding fans — but without the official book number, pricing information and publisher’s name that all books published in China are legally required to have. Among online writers, books like “The Caged Emperor” are known as “individual mark” publications.

“‘Individual mark’ publishing can be traced back more than a decade, not just in danmei circles, but also in cartoon and fan circles. Publishing with ‘individual mark’ is very common,” one online writer told Caixin.

Tang didn’t realize that she was being monitored by police. A dedicated police team had already learned by November 2017 that Tang’s new book would be delivered from Guangzhou to Wuhan in mid-December, and that she would travel to Shanghai around that time to promote her book, the Chutian Metropolis Daily reported.

On the morning of Dec. 10, Tang received an unexpected call from Dong Wenyu, a publishing studio owner who had worked with Tang. Tang’s newly printed books had been confiscated by police after arriving in Wuhan, Dong said.

That evening, Tang called her friend Xiaotian (pseudonym) to discuss the news. They decided it was not a serious matter, and that the police might at worst slap Tang with a fine, Xiaotian later told Caixin.

Nevertheless, Tang sent Xiaotian her Weibo and WeChat passwords after the call, just in case.

The next day, at around 3 p.m., Tang published her last Weibo post before she disappeared — a self-portrait that showed her sitting on a bed with a laptop, pretending to type with her feet, accompanied by the caption, “Intense writing begins.” Police detained Tang shortly after.

“Nobody wants to be next, but we all could be,” one writer told Caixin.

The term danmei originated in Japan, where “tanbi” stories (also known as “yaoi” or “boys’ love”) depicting gay relationships — mostly between men — and usually written for a female audience have long been popular. Chinese danmei tends to emphasize eroticism and aesthetics over plot, and often features fantasy elements — the historical setting of “The Caged Emperor,” for instance, or time travel.

The genre is one of the few spheres of popular media in China where gay relationships are celebrated, although it’s also been criticized as unrealistic or described by some fans as essentially a way for straight women to explore romance outside the constraints of patriarchal gender roles.

“Real life BG (boy-girl) couples around me aren’t romantic in the least,” another danmei fan, writing on a Douban forum, wrote.

“In the BG stories that I have seen, it’s extremely likely that the female lead is a tiresome Mary Sue,” the commenter said, referring to a term used in online fiction circles for a one-dimensional, seemingly perfect heroine.

One danmei writer, who asked to be identified as Little F, said she first began reading danmei in high school, 18 years ago. Back then, when she was still using a dial-up connection at home, Little F would open up the webpage of Sunsunplus, an anime forum, then disconnect from the internet and save the page onto a floppy disk in order to save money and continue reading offline.

Little F said she began writing her own fiction three years after discovering the genre. While Sunsunplus was one of the first Chinese sites where danmei appeared, the genre soon took root in other online literature sites like Hongxiu and Jinjiang Literature City.

The genre has been subjected to crackdowns by China’s media watchdogs and online content moderators, who have criticized LGBT content as “abnormal.”

On Thursday, Jinjiang was asked to shut down “relevant sections and channels” on suspicion of disseminating “obscene and pornographic information,” China’s official anti-pornography authority announced on its official Weibo account.

The anti-vice departments will investigate and severely punish the creators, uploaders and disseminators involved in illegal activity, the National Office Against Pornographic and Illegal Publications said.

Jinjiang responded on its own Weibo account that it would cooperate with law enforcement and shut down parts of the “pure love” section.

Tang’s father, Tang Shijun, was shocked to hear from his wife on Dec. 12, 2017, that Wuhan city police had arrived at the family’s home and confiscated their daughter’s computer. Tang Xin was suspected of engaging in illegal publishing and producing “obscene content,” the police said.

Tang lived in an attic room with an adjoining study in her parents’ house.

“When she was at home, she was upstairs writing from morning until night,” Tang Shijun, a university lecturer, said. “If you asked her what she was writing, she would quickly shut the laptop.”

The study was where Tang’s books first took shape. She completed “Desharow Merman,” her first danmei novel, in 2014.

At the time, multiple readers told Tang they wished to have physical copies of “Desharow Merman.” Tang asked Jinjiang administrators if this would be possible. They said the content would have to be modified and that there was a minimum print run of 6,000 books.

Since Tang wasn’t as famous then, and didn’t think that she could sell so many copies, she gave up on the idea.

Tang also helped other self-published authors design and illustrate their covers. Through them, she learned about the publishing process, what agency fees she might have to pay, and the reputations of individual self-publishing workshops. She eventually decided to contact Yin Ru (a pseudonym), the owner of the Taobao-based publishing workshop Xmoon.

Yin agreed to pay the initial printing fees in exchange for 6% of the sales proceeds. Tang sold 1,300 physical copies of the first edition of “Desharow Mermaid,” and later published three more books through Xmoon and another agency owned by Yin.

In September 2017, after one of the books published by Xmoon was reported as obscene, the Taobao store was closed down. Tang then turned to the workshop owned by Dong Wenyu (a pseudonym), Memory Studio, and entered a similar arrangement with Dong. More than 2,000 copies of “The Caged Emperor,” at the price of 88 yuan ($12.75) each, had been pre-ordered by Sept. 23, 2017.

At around the same time, Tang was being targeted online by someone who called themselves “Yefengchi.” Yefengchi initially accused Tang on multiple forums of plagiarism, Xiaotian told Caixin. When these accusations were refuted, Yefengchi then began accusing Tang of producing obscene works.

On Aug. 1, 2017, Yefengchi wrote on Weibo that a police report had been filed against Tang for selling child pornography. “Since Miss Tang wants fairness and justice, let the public security organs make the judgment,” Yefengchi said in a post that has since been deleted. “Are you satisfied now, Miss Tang?”

When Tang’s trial began on March 11 this year, at least 40 fellow danmei authors and fans from around the country gathered outside the courtroom in Wuhan, eventually convincing officials to lift the family-only rule and allow them in as spectators.

Tang was listed as the first defendant, which surprised her father.

“She’s just one of many customers for the Taobao shop. How can they make her out to be some kind of criminal ringleader?” Tang Shijun asked.

After the March 11 hearing, an online illustrator going by the Weibo handle SLANCX posted a drawing of Tang Xin, pictured from behind, in a pink sweater.

“Tang Xin turned to wave at the visitors’ seats twice, and was very calm and strong throughout the process,” SLANCX wrote on Weibo. “She also smiled beautifully.”