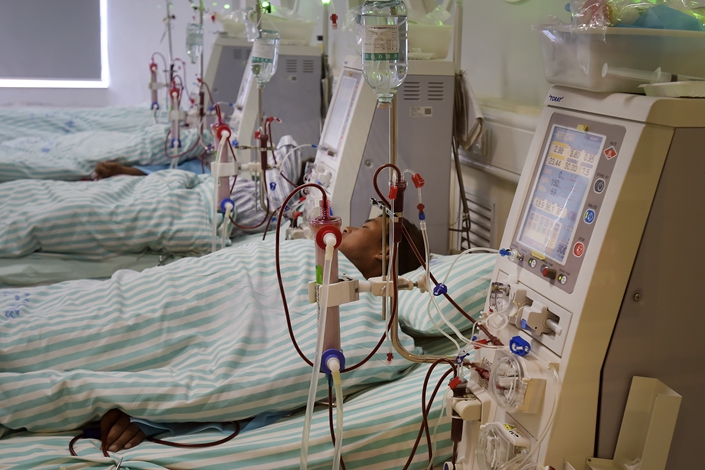 Scores of patients have been infected with hepatitis C at a hospital in eastern China’s Jiangsu province, local authorities said Monday.

The outbreak took place at a specialist blood center at Dongtai People’s Hospital, which provides treatments such as hemodialysis for patients with kidney disease.

Infected patients have been under treatment in isolation wards or at their homes. A total of 69 people are known to have contracted the disease, which is spread by contact with infected blood and can cause scarring and cancer of the liver.

No explanation has yet been given for the outbreak, which was revealed by Caixin at the weekend (link in Chinese), though local authorities pointed the finger at lax hospital management.

One patient said others at center were diagnosed with the virus as early as April, but doctors there continued to perform dialysis as normal until mid-May — when the center required all patients to be tested. The patient asked not to be identified.

One patient’s family member, who also asked for anonymity, told Caixin the hospital was unhygienic, with bedspreads in the wards often going unwashed. They also alleged dialysis fluid was not properly stored.

Strict infection control procedures are required in hemodialysis centers to prevent the spread of blood-borne disease.

Local authorities have dismissed three hospital executives, including the dean, vice dean and the secretary of the hospital’s Communist Party committee.

The family member of one affected patient told Caixin the hospital said it would provide free treatment and pay their medical expenses, but it was not clear what kind of treatment they would provide.

Medical advances in recent years mean most strains of hepatitis C can now be cured with direct-acting antivirals (DAAs), but in China access to diagnosis and treatment has been patchy due to a lack of screening, prohibitive drug costs and regulatory hurdles.

Complex drug registration procedures held up the introduction of DAAs to the Chinese market until 2017, when a handful were approved, including the Gilead Sciences Inc.-developed Sovaldi. A 12-week course of Sovaldi, which was priced at one-fifth of its U.S. cost when it launched in China in November 2017, ran to almost 59,000 yuan ($8,548).

About 10 million people in China live with chronic hepatitis C, with 2.5 million in urgent need of treatment, according to data released by the World Health Organization in 2016.