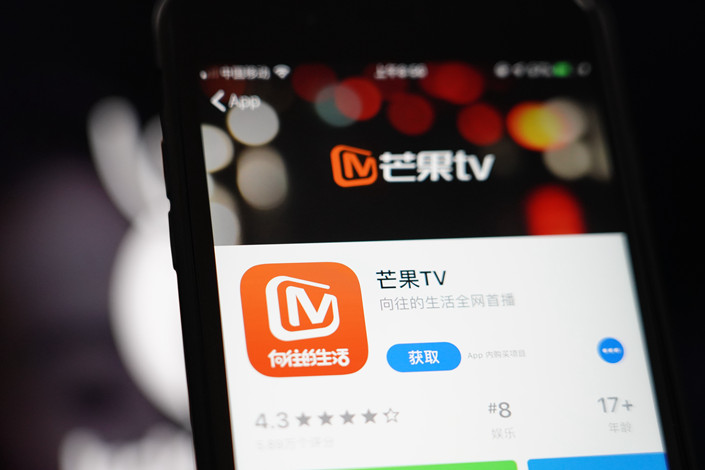 At the end of the first quarter of 2019, Mango Excellent had 13.31 million paid subscribers, making it the country’s fourth largest video-streaming platform. Photo: IC Photo

China’s largest state-backed online video subscription service plans to use the 2 billion yuan ($289 million) from its latest fundraising round to create more original programming, as the Netflix-like platform ratchets up its efforts to take on its privately owned peers.

China Mobile has become Mango’s second-largest shareholder with a 4.37% stake after subscribing to shares valued at 1.6 billion yuan, while China Life Insurance had 1.21% after an investment of 400 million yuan. The stake of the company’s largest shareholder, the state-owned Hunan Satellite TV, will be diluted to 64%.

The majority of the cash will be used to ramp up production of original programming, including scripted TV series and unscripted entertainment shows, Chairman Cai Huaijun told Caixin at an industry conference in Beijing Tuesday.

Based in Central China’s Hunan province, Mango Excellent made its name largely because of its exclusive rights to stream programs made by Hunan Satellite TV, one of the country’s most successful provincial TV networks and the producer of dozens of popular entertainment shows.

By the end of the first quarter of 2019, Mango Excellent had 13.31 million paid subscribers, making it the country’s fourth largest video-streaming platform by subscribers. The company generates revenue both from subscription fees and from advertising.

As a contrast, top player iQiyi Inc. — which is majority-owned by internet search giant Baidu Inc. — has 97 million, while the video-streaming arm of Tencent Holdings Ltd. boasted 89 million paid subscribers in the same period, according to public disclosure information of the companies.

The sector’s No. 3, the Alibaba-owned Youku, last published user data in late 2016. At the time, it said had 30 million paid subscribers.