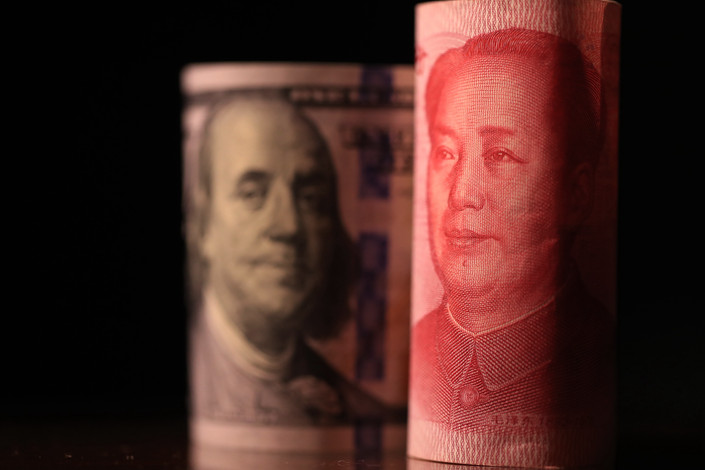 On the currency front, the dollar index was little changed, with the yuan down 2.4 percent against the dollar. Photo: IC Photo

The resurgence of trade friction between China and the U.S. was undoubtedly the most influential factor in the markets in May. Looking at the performance of various asset classes last month, both Chinese A-shares and U.S. stocks were hit by risk-off sentiment, and the yield on 10-year U.S. Treasurys fell by 20 basis points while that on 10-year Chinese government bonds slid by just under 10 basis points.

Turning to exchange rates, the U.S. dollar index was little changed but the yuan weakened 2.4% against the U.S. dollar and it fell by more than 2% against the Renminbi Index, a basket of currencies of China’s major trading partners published by the China Foreign Exchange Trade System. Looking at commodity prices, the S&P Goldman Sachs Commodity Index slid about 4%, while Chinese “black” commodities (comprising ferrous metals and coal products) rose more than 3%.

So how should we interpret the differing market reaction to the trade tensions? The U.S. markets were responding not only to the heightened trade tensions but also to weaker-than-expected economic data which made investors increasingly wary of taking on risk, leading to a decline in the price of risk assets (such as equities and commodities) and the risk-free rate (equal to the interest paid on three-month Treasurys which are considered the safest investment an investor can make).

But Chinese markets behaved differently. It is widely believed that China’s markets would see a greater negative impact from the trade war than those of the U.S., but this has only been reflected in the exchange rate. The relative decline in China’s stock market was close to that of the U.S., when their respective volatility characteristics and the standard deviation of daily fluctuations are taken into account, and the decline in Chinese government bond yields was significantly less than the drop in Treasury yields. Prices of industrial products in China are also rising, moving against the trend.

We can also assess the impact of the trade war on China’s gross domestic product (GDP) by looking at the proportion of China’s exports to the U.S. in its total exports and the elasticity of Chinese exports. Analysis carried out by many institutions estimates that the U.S.’ higher punitive tariffs on $200 billion of Chinese goods will pull China’s GDP growth down by about 0.2 percentage points. If the same tariffs are imposed on the remaining $300 billion of Chinese exports, the total drag will reach 0.5 percentage points.

However, the real negative impact on China’s exports could well be smaller. If we take the remaining $300 billion of exports, the U.S. is dependent on China for more than 30% of the figure, so it will be difficult for it to find substitutes to fill the gap sufficiently in the short term. In addition, these products are closer to the end-consumer which means higher tariffs will bring more obvious pressure on inflation, and there is uncertainty about whether the additional tariffs will go ahead. And even if China’s exports to the U.S. are replaced by products from other countries, those countries are still likely to import raw materials or components from China.

Let’s turn to the question of whether China needs to allow the yuan to depreciate in the face of declining external demand. Such a move might boost exports in the short term, but over the long term, the impact would not be significant. If the yuan depreciates by a large margin, it will pull down other emerging-market currencies with it, and as a result China’s export prices may not get a competitive boost. Depreciation will also bring inflationary pressure to China and is more likely than interest-rate cuts to lead to cost-push inflation or even stagflation.

Compared with two or three years ago, the pressure of capital outflows on China has abated and China’s services-trade deficit has continued to narrow. So if the yuan depreciates further and breaks through 7 to the U.S. dollar, the psychological effect will be far lower than before. That said, if its hand is forced, the government may have a higher tolerance for yuan depreciation, but that doesn’t mean a decision to let the currency slide below 7 would be taken lightly. Only a significant rise in the unemployment rate would provide the basis for continued depreciation.

So, will the trade war lead to significant employment problems? With the structural transformation of the Chinese economy, the tertiary industry now accounts for half of total employment, while the manufacturing sector only accounts for a quarter. I estimate that the number of jobs directly linked to U.S. demand accounts for 0.7% of total employment, or about 5.45 million people, of which the majority are concentrated in the computing, food and beverage, and clothes industries. These have yet to be included on the U.S.’ list of goods subject to punitive tariffs, so the actual impact on employment will be even lower.

In the short term, if China’s GDP performance and employment situation remain within a range that’s acceptable to the government and within its expectations, and given the counter-cyclical adjustment that’s taken place in monetary policy since the beginning of the year, there is unlikely to be any further easing of monetary policy as a result of an escalation of trade tensions.