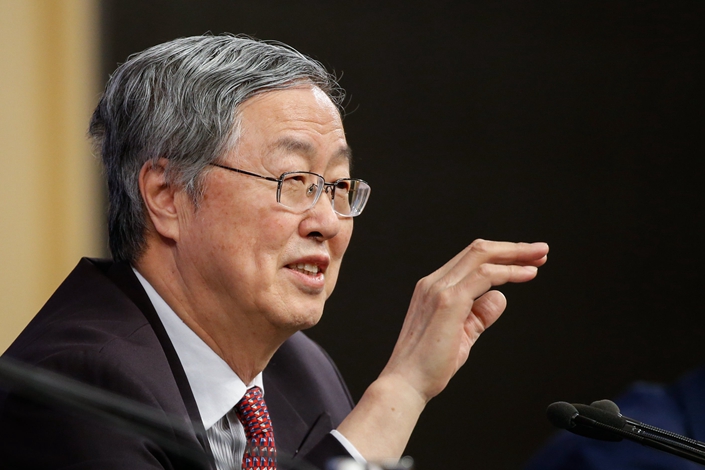 (Tokyo) — Whole numbers don’t really much matter when it comes to exchange rates.

That’s the message that China’s former central bank chief Zhou Xiaochuan had for the participants in the currency market who have been wringing their hands as the value of the yuan approaches 7 per U.S. dollar.

The Chinese currency’s depreciation has been driven in part by a domestic economic slowdown and intensifying Sino-U.S. trade tensions.

“If you see it (7-yuan-per-dollar) as a (psychological) ‘bottom line,’ that may be a bit of an overreaction,” Zhou said Monday at a closed-door roundtable, which was held by the research institute of the Boao Forum for Asia, Japanese think tank the Asia Pacific Initiative and Caixin.

Zhou added that China insists that the mechanism for setting its exchange rate is based on supply and demand, and doesn’t need to alter the principles of the mechanism just because of market fluctuations.

The yuan has faced headwinds recently. The onshore yuan depreciated beyond 6.9 to the dollar on May 17, weakening more than 1,000 pips from May 10, when the U.S. government hiked the additional tariff on $200 billion yuan of Chinese goods to 25% from the previous 10%. Since then, the exchange rate has fluctuated around 6.9.

Looking back, the yuan’s exchange rate against the dollar has passed several whole numbers since the 1980s. Each time, the market might feel a bit of shock, yet it never had a significant effect in the end, Zhou said.

Zhou went on to make the point that a number like seven is just a whole number. It doesn’t have an intrinsic value just because it isn’t followed by a decimal point. “Whether or not it’s a whole number, I don’t think it’s a big deal. Of course, some people’s psychological feelings about whole number are also there, so we may need to be cautious when the yuan gets closer to 7 (per dollar),” he said.

Additionally, Zhou said it’s unreasonable to see 7-yuan-per-dollar as a “bottom line.” For example, when the yuan appreciated to 7 per dollar from 8 per dollar, the actual change was barely more than 10%; yet if the euro appreciates to 2 per dollar from the current around 1 per dollar, the change will be nearly 100%. “From the perspective of fluctuations, integers may lead to misconceptions,” he added.

Zhou is China’s longest-serving central bank governor. He was head of the People's Bank of China for more than 15 years. After he left the central bank in March 2018, he has been working as a vice chairman of the Boao Forum for Asia, a government-backed nonprofit organization that holds an annual summit known as “Asia’s Davos,” a reference to the annual World Economic Forum held in Davos, Switzerland.