Posen: Trump’s Tariffs Are a Wake-Up Call for Global Markets 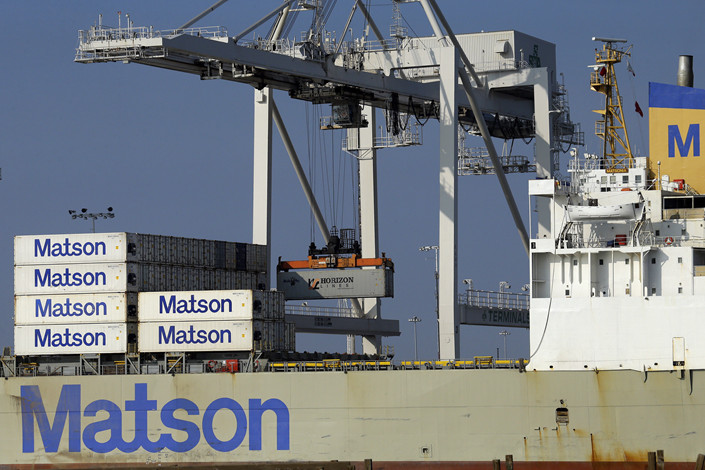 A container ship gets unloaded in December 2017 at the Port of Oakland in the U.S. Photo: IC Photo

President Donald Trump’s plan to impose a 5% tariff on all imported goods from Mexico beginning Monday raises a danger to the U.S. and global economies well beyond his tariff measures to date. This should be a wake-up call to financial markets.

Threatening Mexico with a tariff over the migration issue — despite the overall trade agreement in the United States-Mexico-Canada Agreement (USMCA) — marks a turning point. If tariffs can be raised by unilateral presidential decree, linked to border policy not the economic relationship, markets will realize that the president is not going to deliver a trade deal with either China or Mexico. By weaponizing tariffs, Trump makes evident that he is driven in trade policy by his ideological and perhaps political agenda rather than any tactics to improve U.S. bargaining leverage.

Trump’s announcement of a 5% tariff hike, and a vow to “gradually increase” tariffs until the flow of undocumented immigrants across the border has stopped, has already led to a widespread sell-off the day of his announcement on May 31. Yes, there have been multiple sell-offs through the last couple of years on trade threats from the administration, usually promptly reversed. I believe this one is different. Juxtaposed with China’s announcement that it had made up a list of “unreliable” foreign companies potentially to be treated like the United States is treating Huawei, the latest tariff action by the White House tells markets that developments are not entirely under Trump’s control to pull back. Risk of escalation has become real.

One omen of the danger, suggesting that the latest sell-off is different from previous cases, shows up in the flow of investments into German government securities (Bunds) and the rise of euro’s value in financial markets seen today. Safe-haven flows to government bonds when the U.S. government threatens tariffs are normal, but usually they are primarily into U.S. Treasuries and away from those economies exposed to trade risk. That even some of the safe-haven flows are going into Bunds and the euro, away from Treasuries/dollars, strongly suggests that concerns about the U.S. economy are rising. This is more striking, given that the Trump migration-linked tariffs will particularly harm the auto sector, and similar tariffs could be weaponized against the European Union, too.

It also means that no government will want to make a deal with the United States at all. The Trump administration claims it still wants to reach a trade accord with China, for example. But if you are the Chinese negotiators, your logical reaction to this latest action would be: “Why should I even bother talking to this administration?” The idea that tariffs against Mexico driven by a rationale to stop immigration could be separated from trade negotiations in the minds of foreign governments is risible. Of course, Trump’s tariff announcement now largely wipes out the possibility of ratification of USMCA.

Until now, financial markets have been asleep to the consequences of Trump’s trade policies, despite warnings from experts in many places, including the Peterson Institute for International Economics (PIIE). Markets have been in denial, comforted by the thought that Trump’s protectionism was directed only against China, or was all just well-controlled negotiating tactics. They can no longer be so complacent.

The macroeconomic impact of the latest actions is likely to be much higher now than the direct effect of the tariffs themselves. First, I expect a significant persistent equity market drop, which will have wealth effects on consumption and investment. Second, the delay and diminishment of productive cross-border investment — including investments into the United States, which I have been warning about and tracking — will worsen. Companies will increasingly look for alternatives to locate their research and production activities — and erode the U.S. tax base. Additionally, the direct impact on the auto industry is bound to be sharp and fast, given the 5% tariff, if implemented, will be multiplied back and forth across the border through the global supply chains in every North American auto produced.

By citing a national emergency over a long-term problem like immigration in order to punish an ally like Mexico, President Trump has abused his authority to invoke emergency measures in the face of a genuine national security threat. Please note, abuse of authority does not mean that Trump is doing something self-evidently illegal. Gary Clyde Hufbauer warned in PIIE’s 2016 publication on potential trade wars that a president so inclined could do this legally, though it could be contested in court over time.

But what Trump is doing is contrary to the spirit of the law and Congress’ role. If the Republican Senate majority does not show backbone in standing up to Trump on this abuse, and if it lets stand the administration’s usurpation of Congressional prerogatives in the trade and foreign policy areas, that alone will reinforce the markets’ correct perception that the world has become too uncertain for many investments.

Also, the Chinese will become (further) convinced that there is no point in negotiating with Trump. They might as well step back, and maybe retaliate, and see what happens in the 2020 elections. Trump had been telling them that he would be better to do a deal with than Democrats, which until now they were inclined to believe.

I am suggesting that markets are awakening to an overlooked or underpriced systemic risk, just as they did in 1998 in the wake of the East Asian financial crisis and in 2008 with the start of the global financial crisis. Market anxiety should spread as other countries start invoking Trump’s brand of national security excuse to engage in protectionism against the United States and others. Such actions could easily spiral into a global free-for-all of retaliation and protectionism. We are truly moving from the Art of the Deal into the Fog of War.

Adam S. Posen is president of the Peterson Institute for International Economics.

The article was originally published on piie.com.