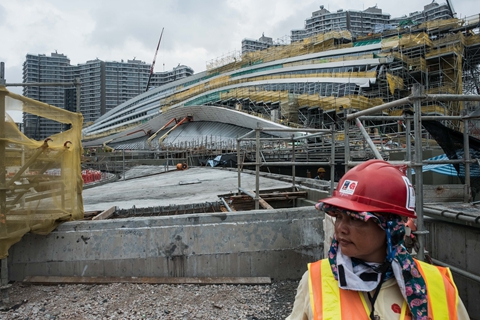 China is easing restrictions on local governments’ borrowing for major infrastructure investments to spur growth in the world’s second-largest economy.

Local governments will be allowed to use proceeds from special-purpose bond issuance as project capital for certain infrastructure investments, according to a document issued Monday by the central government. The document also encourages local authorities and financial institutions to expand funding sources for major projects through market-based financing methods as long as they follow the rules.

According to the document issued Monday by the cabinet, local governments can now use special-purpose bonds to raise project capital for major and strategic investments in highways, railways, electricity and gas projects.

Special bonds must be used for projects that are proven to make certain returns on investment, according to the statement. Local officials should strengthen risk controls for special bond issuance and project management, it added.

Beijing is seeking to fire up growth amid weakening domestic demand and protract trade disputes. Although China’s gross domestic product (GDP) rose by a better-than-expected 6.4% year-on-year in the first quarter, projections for the future remain dim. Last week, the International Monetary Fund lowered its forecast for China’s growth this year to 6.2% from 6.3%, warning that “uncertainty around trade tensions remains high and risks are tilted to the downside.”

The World Bank kept its projection unchanged for China’s GDP expansion this year at 6.2% but cut its estimate for 2020 to 6.1% from 6.2%, blaming a re-escalation in trade tensions.

To encourage local government spending and improve their financial strength, Beijing since last year has allowed local governments to speed up issuance of special-purpose bonds for infrastructure projects. Unlike general bonds, the special bonds are excluded from local governments’ budgets and are repaid from returns on projects instead of by the government.

Last month, the Ministry of Finance said it will allow local governments rather than top central authorities to determine the maturity structure of their bonds this year to better match project funding needs and deadlines.

According to the Monday document, qualified projects that have been halted by funding shortages will be allowed to negotiate with financial institutions to get additional funding under proper risk controls. Local governments will also be encouraged to provide credit support by supplementing collateral or guarantees to certain projects under the condition of complying with the rules, according to the notice.

Policies to stimulate growth have sparked concerns over lingering debt risks facing the country. China’s overall leverage ratio, which measures outstanding debt in the real economy including government, business and households against nominal GDP, increased to 248.83% at the end of March, the highest in a data series going back to 1993, according to a joint study released by two Beijing-based state-backed think tanks.

The debt-to-GDP ratio was up 3.73 percentage points from the same period a year earlier and 5.1 percentage points higher than at the end of 2018, largely reflecting a shift in the focus of government policy toward stabilizing economic growth, the report said.

The Monday notice requires local authorities to strictly monitor the use of special bond proceeds in local construction. Local governments should not issue special bonds that exceed the project’s capacity for return or use proceeds of the bonds for equity investments, the notice said.

In a separate statement (Link in Chinese) published by several ministries explaining the new policy, regulators said they will maintain close scrutiny of the debt risks by carefully assessing the qualification of projects, strictly implementing policies and enhancing risk evaluation to make sure borrowing matches repayment ability.

In the first five months this year, local governments issued 1.46 trillion yuan of bonds, including 859.8 billion yuan of special purpose bonds, according to the statement.