By Timmy Shen and Zhang Yu 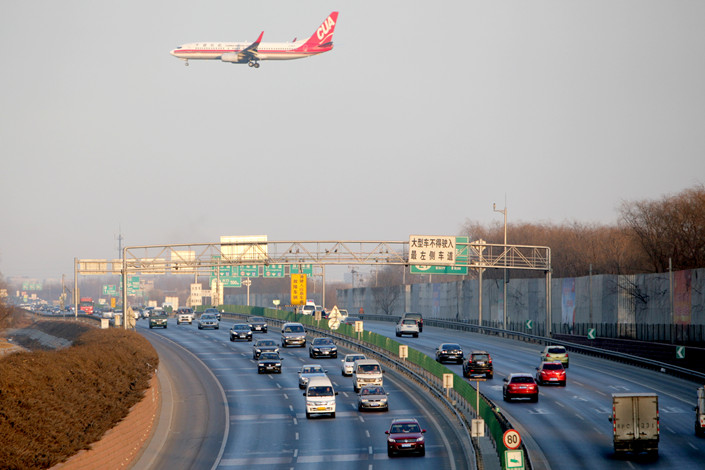 (Beijing) — The International Monetary Fund (IMF) lowered its forecast for China’s economic growth this year to 6.2% from 6.3% on Wednesday, just two months after upgrading it, warning that “uncertainty around trade tensions remains high and risks are tilted to the downside.”

“The near-term outlook remains particularly uncertain given the potential for further escalation of trade tensions,” IMF Deputy Managing Director David Lipton said in a statement. He was speaking after a two-week visit by a team from the Washington-based lender for talks on its Article IV consultation, an annual report that assesses a country’s economic and financial health and aims to forestall future financial problems.

The policy stimulus announced so far by Chinese authorities was sufficient to stabilize growth in 2019 and 2020 despite the recent increase in U.S. tariffs, Lipton said. He added that no additional policy easing was needed, provided there were no further increases in tariffs or a significant slowdown in growth.

“However, if trade tensions escalate further, putting at risk economic and financial stability, some additional policy easing would be warranted,” he said. “For example, a fiscal expansion, which is centrally financed, pro-rebalancing, and targeted to low-income households, could be used to stabilize the economy.”

In April, the IMF raised its 2019 growth forecast for China to 6.3% from 6.2% to reflect the then brighter prospects for trade talks. However, over the past month, trade relations between China and the U.S. — the world’s two largest economies — have deteriorated. Since May 10, the U.S. has increased punitive tariffs on $200 billion of Chinese products to 25% from 10%. China struck back, raising additional tariffs on more than 4,500 American products to between 10% and 25% effective on June 1.

In its statement Wednesday, the IMF also shaved its growth estimate for 2020 for the second time in two months. The latest projection is for 6.0%, down from 6.1% in its April report which was a downgrade from an earlier forecast of 6.2%.

Policy stimulus from the Chinese government had partially offset the impact of the higher tariffs, Lipton said, but he urged the U.S. and China to quickly resolve their trade tensions through a “comprehensive agreement that supports the international system and avoids managed trade.”

Lipton acknowledged the progress China had made in reducing credit growth and corporate debt through “concerted efforts to strengthen financial regulation, reduce regulatory arbitrage, and improve the framework for financial supervision.” The priority going forward should be to fully implement regulatory reforms that have already been announced and to continue with structural regulatory reforms to reduce still-elevated vulnerabilities, he said.

Bank capital, especially for small and medium-size banks, should be strengthened and micro-prudential regulations should not be relaxed, even temporarily, for cyclical reasons or to offset tighter domestic financial conditions, he added.

In April, a top official from the commission overseeing central SOEs said that China would adopt flexible and specific policies to overhaul the country’s massive state-owned sector. He noted the key principles of the reform were to maintain the Communist Party’s leadership on SOEs while drawing a clearer boundary between government and business.

The IMF isn’t the only multilateral institution lowering its growth expectations for China. The World Bank this week kept its projection for this year’s gross domestic product (GDP) expansion unchanged at 6.2% but cut its estimate for 2020 to 6.1% from 6.2%, blaming a re-escalation in trade tensions.

China’s GDP growth stabilized at 6.4% in the first quarter of 2019, bucking analysts’ expectations of a further slowdown, as market confidence recovered on the back of policy support and progress in Sino-U.S. trade war negotiations at the time.