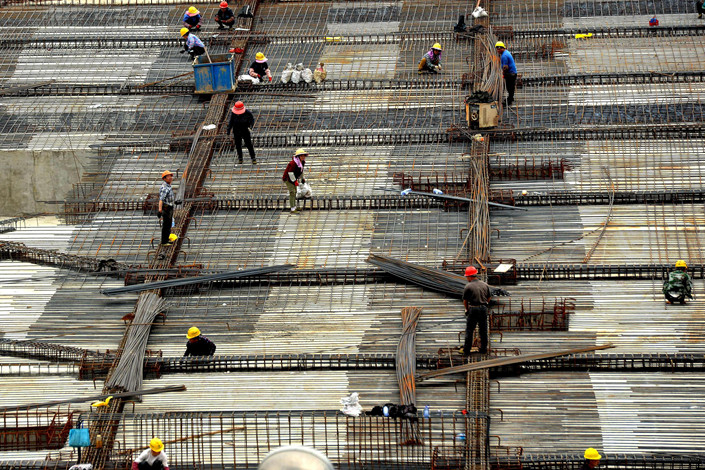 A crew works at a construction site in East China’s Fujian province on March 14. Photo: VCG

* China is facing both external risks from the threat of more U.S. tariffs and domestic risks related to high corporate debt, the World Bank said

* Stimulus measures will likely work in the short term, but they could also add to the debt burden of an already highly indebted corporate sector

(Beijing) — The World Bank has kept its forecast unchanged for China’s economic growth this year, but revised down its expectations of next year, blaming re-escalated trade tensions with the U.S.

In its report on world economic prospects released on Wednesday, the global development institution projected China’s gross domestic product (GDP) to grow 6.2% this year, unchanged from its previous forecast released in January. It predicted China’s GDP would increase 6.1% next year, down from its previous projection of 6.2%.

The latest forecasts were made on the basis of there being no further escalation of Sino-U.S. trade disputes, it noted.

Over the past month, trade relations between the world’s two largest economies have deteriorated further. Since May 10, the U.S. has hiked punitive tariffs on $200 billion worth of Chinese goods to 25% from 10%. China retaliated by raising additional tariffs on more than 4,500 American products to between 10% and 25% on June 1.

Currently, China is faced with both external risks due to the threat of more U.S. tariffs and domestic risks related to high corporate debt in sectors with worsening profitability, the World Bank said. China’s nonfinancial sector debt is above levels seen at the peak of previous credit booms in other major emerging markets and developing economies, it added.

In the short term, the Chinese government can leverage fiscal and monetary stimulus to cushion the impact of these risks, yet the stimulus could become ineffective over time, the World Bank said. The policy stimulus could also add to the debt burden of the already highly indebted corporate sector and contribute to rising household debt, it added.

“China’s immediate policy challenge is to manage disruptions caused by trade tensions with the United States without exacerbating domestic vulnerabilities,” the bank said. “In the longer term, the country’s key challenge is to continue its gradual shift to more balanced growth, while reducing financial stability risks stemming from high levels of corporate debt.”

The World Bank downgraded its projections for this year’s and next year’s global economic growth to 2.6% and 2.7%, respectively, from the previous 2.9% and 2.8% projections.

Global trade and investment have been weaker than anticipated at the start of this year, and economic activity in major advanced economies and some large emerging markets and developing economies has been weaker than previously expected, the bank noted.