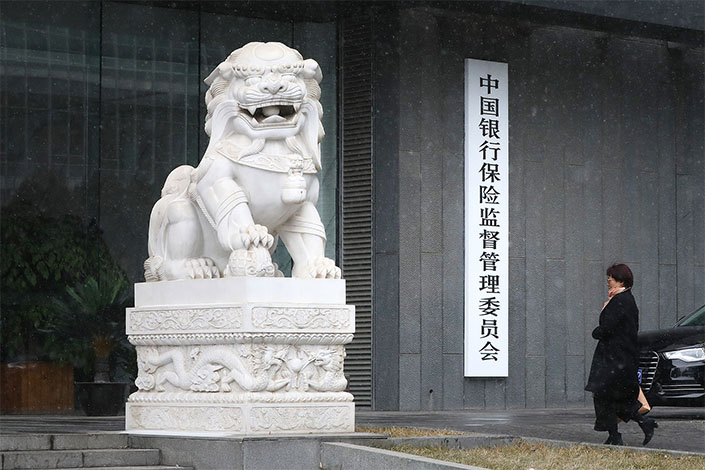 The China Banking and Insurance Regulatory Commission in Beijing on Feb. 14. Photo: VCG

We’ve seen a breakthrough recently in the way problems in China’s financial system are handled: Baoshang Bank was taken over by the central bank and a financial regulator as part of efforts to untangle the complex underground financial empire of Tomorrow Holding Co. Ltd., China Construction Bank was entrusted to manage the lender’s daily operations, and a new deposit insurance management company was set up to participate in the cleanup.

This has been a difficult game of chess and it represents a milestone in the history of China’s financial system. First, it marks the beginning of a specialist clean-up of the complex underground financial empire of Tomorrow Holding. Second, against the backdrop of a crackdown on the shadow banking industry, the Baoshang takeover has for the first time broken the implicit guarantees that underpin the interbank market. Third, although this way of dealing with problematic small and midsized banks is common international practice, in China it has set a precedent and gives us the opportunity to test our version of the Federal Deposit Insurance Corp. (FDIC), the agency that deals with failing banks in the U.S.

Since the detention of Xiao Jianhua, the controller of Tomorrow Holding, in January 2017, there have been calls for a specialized and unified approach to dealing with the company. The intricate web of Tomorrow Holding’s internal capital flows, its many and diverse projects, and the involvement of so many different interest groups, means that only by taking over the company as a whole is it possible to clarify the assets, liabilities and capital flows of the various entities involved and avoid arbitrage behavior. Tomorrow is so fraught with complexity that at present the monetary and financial authorities have no alternative but to focus on dealing with the most pressing, obvious and more easily resolved risks first — which in this case is Baoshang Bank.

Baoshang Bank was a microcosm of the disorderly development of China’s shadow banking industry and its seizure was necessary not only because of the credit risks resulting from the embezzlement of funds by Tomorrow Holding. The bank relied heavily on the interbank market, where banks borrow from each other, using debt raised from the market to bolster its liquidity, which allowed it to leverage up. British bank Northern Rock, which collapsed in 2007 at the beginning of the global financial crisis, was also heavily dependent on the interbank market, which accounted for 60% of its liabilities. To ensure financial stability and prevent Northern Rock-style events in China’s banking sector, the authorities have decided to crack down on the rampant growth in shadow banking activities and prevent funds from being recycled in the financial system rather than being used for lending to the real economy, and safeguard against market failure. They also need to end the excessive dependence of financial institutions on implicit government guarantees and force them to abandon the belief that a financial license is a life raft.

Rather than being carried out secretively, the takeover of Baoshang Bank has been open and transparent, which is a major step forward. To ensure financial institutions learn timely and appropriate lessons from the Baoshang Bank takeover, and that losses faced by counterparties are controllable, the team charged with managing the bank immediately notified institutions of the guarantees they would be offered on their claims against the bank. This was done even before verification of its assets and capital had been completed, thus setting up a safety net.

It’s important to note that controlling the losses of counterparties shows the People’s Bank of China (PBOC) will make its refinancing facilities available to problematic institutions, but a mechanism needs to be set up to make sure it’s effective. The key to breaking down the belief in implicit guarantees in the interbank market while at the same time maintaining market stability is to set up a safety net for all potentially problematic banks — not just Baoshang Bank. But this protection should not cover up problems, it should allow the PBOC to act as a lender of last resort and provide operational and accountability mechanisms to deal with the problematic financial institutions. This is what we could call the Chinese version of the FDIC.

After the 2008 global financial crisis, hundreds of the roughly 8,000 small and midsized banks in the U.S. collapsed. Yet the U.S. financial system remained stable and depositors’ interests were protected, and the role played by the FDIC in that needs to be recognized. After several years of effort, the PBOC has also set up a deposit insurance fund. But the size of the fund is not commensurate with the total assets of the banking industry, and its position under the central bank’s financial stability bureau was not part of the original intention.

The deposit insurance management company set up on the same day as Baoshang Bank was taken over is a special purpose vehicle, a convenient way to manage the fund and other related operations rather than a move to put the fund on a solid institutional footing. In order to learn from the FDIC and to avoid turning the deposit insurance fund into a tool to help cover up failures in regulation and policy, the fund should be relatively isolated from the banking regulator, and even the monetary authority, and be allowed to operate independently. Only then can the fund become a specialized institution able to deal with problematic small and midsized banks. Only then will problematic banks be prevented from blackmailing local governments and the central bank into bailing them out and unable to rely on the bottomless pit of the state’s implicit guarantee.