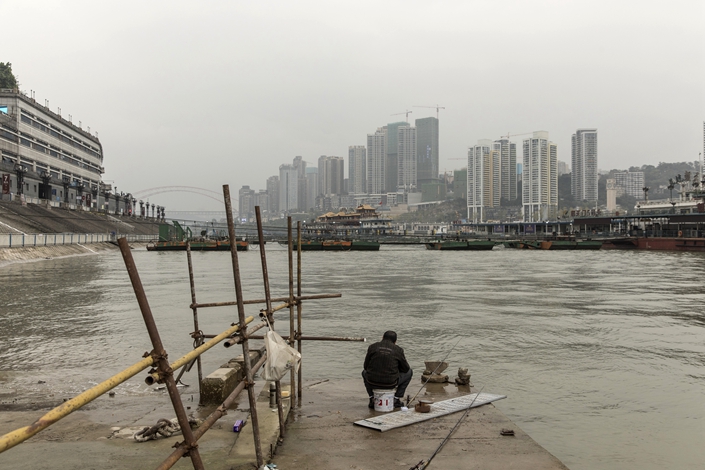 An angler sits fishing at Chaotianmen dock in Chongqing on Nov. 27. Photo: VCG

There has been a lot of talk lately about China’s economic growth losing step.

It is true that the economy faces challenges. In the short term, China is now in a critical period of deleveraging and market clearing. Real estate investment has been restricted under the principle that “housing should be for living in, not for speculation.” There doesn’t appear to be any reason that either domestic or global demand will surge. In the mid- and long-run, problems such as an aging population are weighing on the economy, and the structure of the economy is changing. Influenced by both internal and external factors, it was inevitable that China’s economic growth would flag to some extent.

Some economists say that China is in a situation similar to that of Japan when its period of rapid economic growth ended near the end of the last century. Japanese economists later said that the country at the time had missed its opportunities for structural reform and instead employed monetary and fiscal policy to the furthest extent possible. Neither one is a substitute or solution for structural reform, though both can coordinate the reform.

If we ignore structural reforms and depend solely on easing monetary policy, relaxing financial regulation and employing proactive fiscal policy, we could see the return of low market efficiency, soft budget constraints and market players recklessly increasing their leverage.

These days, Chinese entrepreneurs lack confidence, which reflects their concerns about the domestic and global economy, as well as concerns about whether social mechanisms such as the rule of law can be improved. Those concerns cannot be resolved solely through macroeconomic controls.

The current discussions about the economy still tend to focus on what macroeconomic controls can accomplish. People hold the notion that monetary or fiscal policy is a magic wand that can fix any economic slowdown, which is a myth.

For a while now, observers of different parts of the economy have been calling for an end to the government setting GDP growth targets. They believe China should try to figure out the real picture of its potential economic growth through a market-oriented mechanism, instead of overly relying on macroeconomic controls. We can see that China’s policymakers have, to some extent, been freed from the planned-economy mindset that obsesses over economic growth data. They have also introduced the goal of boosting high-quality growth. It is progress.

Since 2015, a consensus has emerged that advancing structural reform is the key to improving potential economic growth and fostering a high-quality economy. However, the concepts of “high-quality growth” and “structural reform” still lack concrete goals and quantitative metrics.

The definition of structural reform varies from country to country, as each faces different structural problems. As to China’s own structural problems, a piecemeal approach will not fundamentally solve them. The key is about how to improve the market economy and rule of law, and how governments interact with them in a proper way. Significant issues include whether market entities can operate in a completely market-driven manner, whether information transparency is sufficient without unnecessary interference, whether the rule of law is fair and effective, and whether government services are in place, accessible and efficient.

This commentary's headline has been corrected to express the author's point about achieving better growth, not faster growth.