By Huang Meilun and Ren Qiuyu 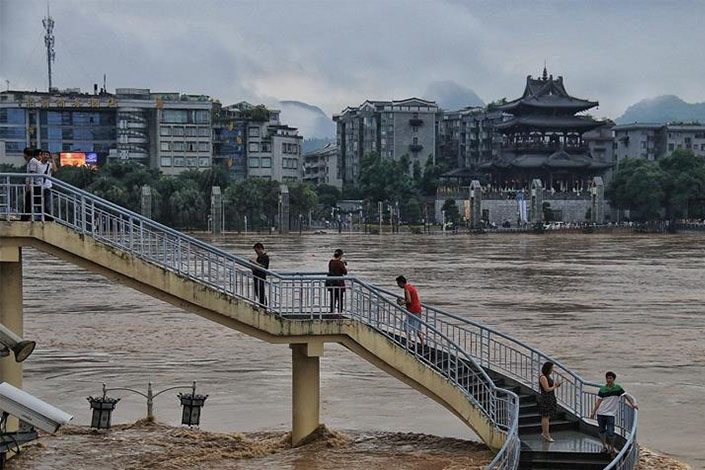 Sixty-one people are dead and 14 are missing after a week of heavy rainfall in southern China that has caused flooding, mudslides and other natural disasters, authorities said.

More than 5.3 million people have been affected and 153,000 people are in need of rescue across eight provinces and municipalities, including Zhejiang, Fujian, Jiangxi, Hunan, Guangdong, and Guizhou provinces, Guangxi Zhuang autonomous region, and Chongqing municipality, according to statistics from China’s Ministry of Emergency Management last updated at 4 p.m. on Thursday.

according to information given at a State Council Information Office media briefing on Wednesday.

China’s flood season begins in April in southern China and in May in northern China, and lasts through October. “Since the beginning of the flooding season, there have been 14 periods of heavy rain in China, with a cumulative precipitation of 163 millimeters (6.42 inches), close to the amount in the same period last year, 165 millimeters,” said Ye Jianchun, secretary general of the National Flood Control and Drought Relief Headquarters.

Extreme weather has become more frequent in recent years, leading to greater uncertainty around flood control and prevention, and it is still difficult to accurately forecast weather for specific locations, Ye said at a press conference on Wednesday.

As of Monday, 22 provinces had suffered flooding to varying degrees since the start of the season, affecting 6.75 million people. “Generally, flood control and relief work is facing a complicated and grim situation this rainy season,” Ye said.

On Wednesday, the state-run Xinhua News Agency reported that torrential rains in Guangxi had left 17 dead and nine missing. Floods and landslides were reported to have killed 13 in Guangdong as of Wednesday morning.

Heavy rainfall is expected to continue through the end of the week.