Costco Business Model Could Be Lost in Translation, Analysts Say

By Mo Yelin and Sun Liangzi 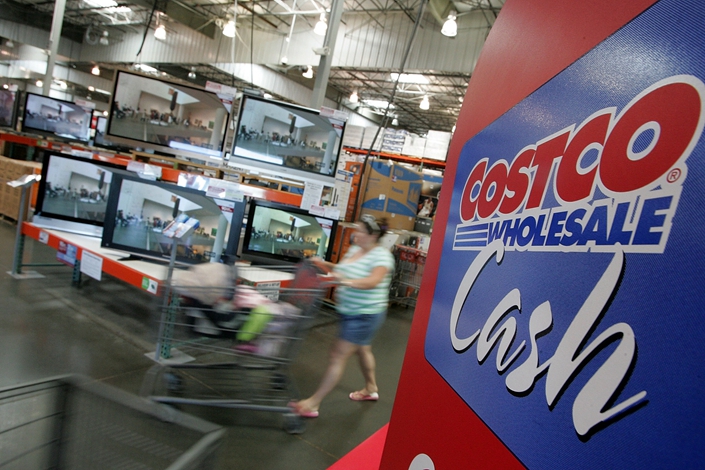 A customer pushes her shopping cart by a display of televisions at a Costco store on July 13, 2007, in Richmond, California. Photo: VCG

After setting up an online store for Chinese customers five years ago, Costco Wholesale Corp. is set to open its first brick-and-mortar store in the country at the end of August.

The store in Shanghai’s Minhang district will open on Aug. 27, the U.S. supermarket giant said on its official WeChat account (link in Chinese) last week.

It comes one year after Costco got an official license to run food-related businesses in the country through its China subsidiary Kaikeshi, which means “open the market to customers” in Chinese. Costco set up the subsidiary in Shanghai in 2017.

Costco’s model in North America has been based on families buying bargain products in bulk, transporting them in their cars and then storing them at home. Analysts said Costco faces a very different market in China, where most city-dwellers prefer to shop frequently and haven’t embraced buying in bulk.

Costco said it would offer two types of membership at its brick-and-mortar store — one for families and the other for corporations, both with an annual price of 299 yuan ($43). Costco said customers have been able to apply for memberships since April.

Given the particular shopping habits of Chinese customers, the company’s entry is unlikely to have big impact on the retail market, said an industry analyst who asked to remain anonymous as she is not allowed to speak to media without approval from the institution she works for.

The analyst predicts Costco will do better in larger first-tier and second-tier cities than in smaller third- and fourth-tier ones due to differences in customer recognition of the U.S. brand.

Costco’s membership model in the U.S. has allowed it to make the bulk of its profit from regular membership fees paid by customers. Those fees entitle them to buy products in bulk for cheap prices.

But such low prices rely on the company using its dominant bargaining power over suppliers to set prices across the entire supply chain. In China’s highly segmented retail market suppliers have more choice, eroding such an advantage, another analyst said.

For the quarter ending May 12, Costco reported profit of $906 million on revenue of $34.74 billion, including $776 million from membership fees. The company has about 96 million memberships globally, according to its website.