Reporter’s Notebook: Why Is Xi Visiting North Korea Ahead of the G-20? 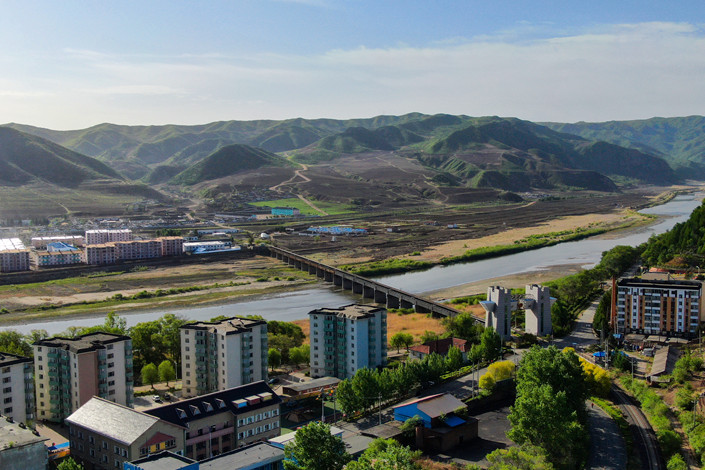 The border between North Korea and Northeast China’s Jilin province on May 23. Photo: VCG

As China and North Korea celebrate 70 years of diplomatic relations, the situation on the Korean Peninsula has entered a critical period of transition and adjustment. Top Chinese leaders will finally settle expectations and visit North Korea this week.

On Thursday and Friday, President Xi Jinping will make his first official visit to North Korea and hold talks with its leader, Kim Jong Un.

Last March, Xi called Kim’s first visit to China “a special and significant occasion,” and the Chinese leader’s visit to North Korea can be described the same way. It not only reflects the importance China places on its traditional friendship with the Democratic People’s Republic of Korea, but is also bound to “inject new momentum” into the stalled peace process, according to the International Department of the Communist Party of China.

Over the last 70 years, visits between the top leaders of the two countries have played a driving role in the relationship. This visit will be Xi’s first since taking office, and he will be the first Chinese leader to visit the country in 14 years. Since March 2018, Kim has visited China four times.

Kim has often visited China around major points in the diplomatic peace process on the Korean Peninsula. Beijing has long played a constructive role in the issue and maintained its important relationship with the Pyongyang.

Kim made his first visit to China in March 2018 and met with Xi before his historic summits with the leaders of South Korean and the United States. At the time, Kim affirmed to Xi that the Korean peninsula could denuclearize providing South Korea and the U.S. responded to the North’s efforts and maintain a peaceful and stable atmosphere. Xi said he appreciated the measures that North Korea had taken and called on all parties to support improving relations and make efforts to continue diplomatic talks.

After the summit between Kim and South Korean President Moon Jae-in, Kim made his second visit to China. Shortly thereafter, North Korea and the U.S. finalized their agenda for the first North Korea-U.S. summit.

The third time Kim met with Xi was one week after his summit with U.S. President Donald Trump in June 2018. The two sides had reached a consensus on denuclearization and on the establishment of a peace mechanism, and signed a joint statement of action. Xi affirmed China’s commitment to playing a constructive role in moving the process forward.

During Kim’s fourth visit, in January this year, he expressed to Xi that his country would continue its efforts toward denuclearization as North Korea and the United States prepared for a second leadership summit in Vietnam.

But the February Kim-Trump talks in Hanoi broke down, stalling the diplomatic process. Kim’s meeting with Xi will be his second meeting with another leader since the Hanoi summit — he met with Russian President Vladimir Putin in April.

Before the sudden shift on the Korean Peninsula last year, North Korea had continuously refused to heed international norms and repeatedly fired missiles and conducted nuclear tests. Because of this, its relations with China had entered a difficult period. Since taking office, Xi has visited South Korea, but had not found an opportunity to visit its neighbor.

North Korea appears to have shifted its national strategy from simultaneous development of nuclear capabilities and the economy to prioritizing economic work, and has held several major conferences to improve its economic management. In Vietnam, Kim’s top political and economic aides visited high-tech factories in an apparent effort to study the country’s economic model.

Despite the breakdown in U.S.-North Korea talks in February, Kim has since made an effort to reach out to the United States president, sending another letter this month that Trump called “very nice.” However, there are signs that the Trump administration’s interest in North Korea has waned as the stalemate continues.

Xi’s official “state visit,” a rare and significant designation for a trip to North Korea, comes on the eve of the G-20 summit to be held in Osaka, Japan, on June 28 and June 29. Xi and Trump are expected to meet on the sidelines of the meeting to exchange views on issues such as the unresolved trade dispute and, of course, the issue of the Korean Peninsula. The world will watch closely whether China, a key neighbor of North Korea, can help improve the situation on the Korean Peninsula.