By Wang Jing and Isabelle Li 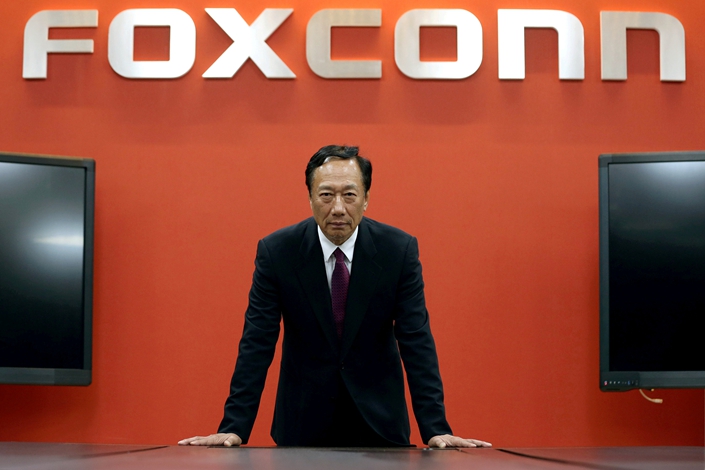 Terry Gou, founder and chairman of Foxconn, gives an interview in Taipei in June 2017. Photo: VCG

Taiwan’s richest man Terry Gou announced Friday that his successor as chairman of electronics giant Foxconn will be Liu Young-way, the current general manager of the company’s semiconductor division.

After weeks of speculation, Gou revealed the new head of Hon Hai Precision Industry Co. Ltd., which does business under the name Foxconn, as the 68-year-old steps down to run in the 2020 election for Taiwan’s top leadership office.

The 63-year-old Liu will take over as Foxconn’s chairman on July 1, according to a company announcement. Li Jie, vice chairman of Foxconn’s Shanghai-listed subsidiary, Foxconn Industrial Internet Co. Ltd., will be promoted to become Liu’s deputy.

“Both gentlemen have their own specialties,” Gou said in an interview Friday after the announcement was made at Foxconn’s shareholder meeting.

Liu has been working at Foxconn for decades and is a senior figure in Taiwan’s electronics industry, and Li is a top-notch expert in the “industrial internet,” Gou said. After working in the U.S. for 33 years, Li joined Foxconn less than two years ago. The pair will take charge of further consolidating Foxconn’s diverse businesses, Gou said.

As of March, Foxconn had at least 841 subsidiaries and affiliated companies in businesses such as smartphone assembly, PCs, servers, TVs, internet gear, e-commerce, biotech, electric vehicles, robots and drones.

“Hon Hai Precision and Foxconn are my babies. I really hate to part with them,” Gou said in the interview.

As the founder of the company that accounts for almost one-third of global electronics manufacturing, Gou is a business legend on the island. On April 17, he announced his bid to become the next leader of Taiwan.

For the past 45 years, Gou has been the sole decision-maker and face of the company. If he wins the election, Gou will have to step down from all positions at Foxconn, leaving the tech giant in the unprecedented position of being without his leadership.

The manufacturing giant that Gou started more than 40 years ago now employs 1.4 million people globally and is a key supplier for Apple, Amazon and other global tech giants. In 2018, Foxconn booked revenue of NT$5.29 trillion ($171 billion).

No one person will replace Gou as CEO. Instead the role will be taken over by a committee of nine people. On June 11, Hon Hai Precision Industry held its first investor relations conference in company history and announced that it will establish a nine-person “operations committee” to oversee the sprawling group’s communication, coordination and decision-making.

Since Gou’s announcement in April, there has been rampant speculation about who would succeed him at Foxconn. A source familiar with the matter told Caixin that the company did not go through a Game-of-Thrones-like power struggle — something that outsiders had speculated about. Neither the changes to the company’s board nor the creation of the nine-person committee was a surprise, the source said.