Three Things to Know About Xi and the G-20 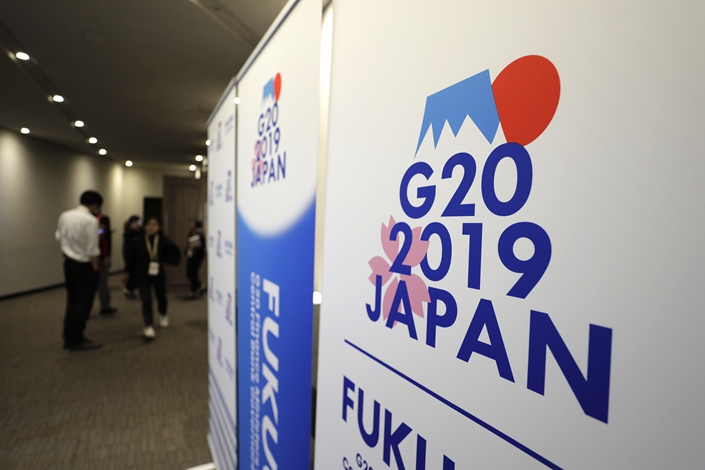 Banners for the G-20 meeting of finance ministers and central bank governors stand outside the meeting’s media center in Fukuoka, Japan, on June 8. Photo: VCG

The upcoming Group of 20 (G-20) Leaders’ Summit will be closely watched with Chinese President Xi Jinping and his U.S. counterpart Donald Trump set to meet on the sidelines to discuss the two countries’ increasingly rocky relationship. But the G-20 summit is about more than China-U.S. trade.

China’s foreign ministry has now officially announced Xi will attend the G-20 summit from Thursday to Saturday, in what will be the Chinese leader’s first visit to Japan since he became president in 2013. But significantly, the trip will not include an official state visit.

Today, officials from China’s foreign, finance and commerce ministries and central bank briefed the press on what meetings Xi is expected to attend later this week in Japan — as well as who he is expected to meet. Here’s what we’ll be watching for.

What will it mean for Sino-Japanese relations?

The foreign ministry’s announcement on Sunday that Xi would attend the Osaka summit did not come with news of an official state visit to Japan. That suggests Japanese Prime Minister Shinzo Abe’s efforts to further normalize relations between China and Japan are unlikely to materialize in the short term.

Sino-Japanese ties have long gone up and down, and the latest low point was in 2012 when the Japanese government bought and nationalized a group of disputed islands in the East China Sea — known as the Diaoyu in China and the Senkaku in Japan. Abe invited Chinese Premier Li Keqiang to visit Japan in May 2018 for a meeting that was seen to have warmed relations, and Abe was invited to visit China in October.

The last visit by a top Chinese state leader to Japan was by former president Hu Jintao in 2008. Xi also visited Japan in 2009 while vice president. China’s ambassador to Japan Kong Xuanyou declined to confirm rumors Xi would visit Japan next year when asked by Japanese newspaper Yomiuri Shimbun on June 18. But he said discussions were underway and would depend on whether the nations maintain positive relations.

Tensions escalated in recent months as the world’s two largest economies placed tit-for-tat tariffs on each other’s exports, and there has been hope among many that a meeting between Xi and Trump would help restart the stalled trade talks. Although Xi had a phone conversation with Trump on June 18 and was expected to exchange views on “fundamental issues” concerning China-U.S. relations at the Osaka summit, according to the foreign ministry, no further details have been disclosed about the upcoming meeting.

The U.S. government announced on Friday it would add five Chinese supercomputer-makers to its export blacklist, further complicating the picture and injecting pessimism into prospects of a resolution any time soon.

Who else will Xi meet?

Besides meeting the Japanese and U.S. leaders at the summit, Xi is also expected to hold trilateral talks with Indian Prime Minister Narendra Modi and Russian President Vladimir Putin. Such a meeting was suggested by Modi during the Shanghai Cooperation Organization summit earlier this month in Bishkek, Kyrgyzstan.

India has recently slapped tariffs on U.S. fruit and nuts after the U.S. withdrew Indian trade privileges. Meanwhile escalating tensions between the U.S. and Iran have also been of concern to the three nations and these are likely to be on the agenda.

Xi will also attend an informal meeting of the leaders of BRICS, which comprises Brazil, Russia, India, China and South Africa, the foreign ministry said Monday. Chinese officials didn’t elaborate on details of the meetings.

How Xi voices his views on world trade, the digital economy, sustainable development, climate change and the environment will also be closely watched. China is expected to push for WTO reforms aimed at enhancing the organization’s authority and effectiveness, Wang Shouwen, vice minister of commerce, said Sunday at the foreign ministry press conference.