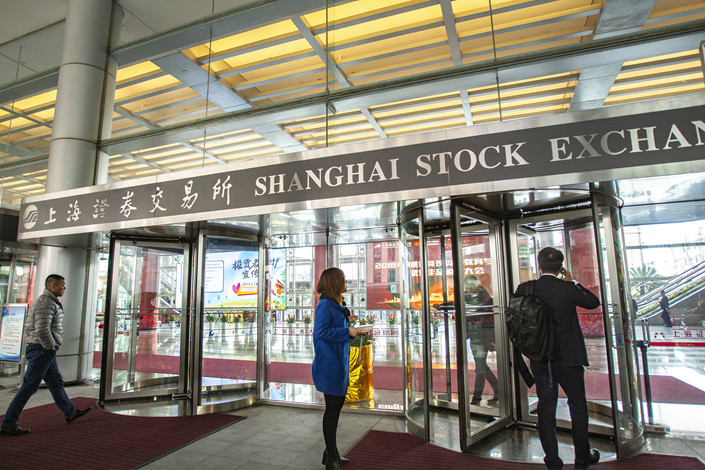 The first company to go public on Shanghai’s new high-tech board has just released its initial public offering (IPO) price at a much higher price-to-earnings ratio than has been seen over the past few years on the Chinese mainland.

Suzhou HYC Technology Co. Ltd., a manufacturer of display and touch-testing equipment, has set its IPO price at 24.26 yuan ($3.50) per share, according to its filing (link in Chinese) to the Shanghai Stock Exchange late Tuesday. That price values the company at 41 times its 2018 earnings after deduction of nonrecurring gains and losses — much higher than the prevailing price-to-earnings ratio of 23 times earnings on the Chinese mainland stock exchanges.

Since early 2014, the China Securities Regulatory Commission (CSRC) has unofficially capped IPO prices through informal instructions known as “window guidance,” Caixin previously learned. In January that year, drugmaker Jiangsu Aosaikang Pharmaceutical Co. Ltd. set an IPO price that gave it a price-to-earnings ratio of 67, well above the average on the mainland stock markets at the time. That sparked complaints that Aosaikang’s IPO would allow the company to raise too much money too easily.

HYC is set to raise 973 million yuan by issuing 40.1 million new shares through a listing on the new high-tech board, according to the filing. Huatai Innovative Investment Co. Ltd., a subsidiary of HYC’s sponsor Huatai United Securities Co. Ltd., will purchase 4.1% of the new shares for about 39.9 million yuan.

The high-tech board was designed to improve the mainland’s appeal to innovative and high-tech companies. A key change is the shift to a market-based registration system for new listings that aims to resolve shortcomings in the current lengthy, bureaucratic IPO process that candidates face on other mainland boards.

Recently, doubts have emerged on how “high-tech” HYC really is. Just before the company conducted its pricing consultation last week, a financial blogger said in a social media post (link in Chinese) that the company might be misleading investors with its many references “integrated circuit” and “semiconductors.” The terms might lead one to believe that HYC is a chipmaker, even though only a small portion of its total revenue comes from this line of businesses, the post said.

HYC responded in a statement that it has clearly said in its prospectus and at roadshows that it’s a testing equipment supplier in the areas of display testing and integrated circuits.

The main challenge facing the high-tech board is its lack of a clear definition for what constitutes a high-tech and innovative company, said a senior sponsor representative at a brokerage. “Sponsors or even authorities have not provided clarity on this,” the representative told Caixin.

Also, many are concerned that it’s likely for the board to see sharp price fluctuations in its early days of operation. Under exchange rules (link in Chinese), there’s no limit on the price movement of a stock in its first five days of trading. After that, gains and losses are subject to a 20% daily cap.