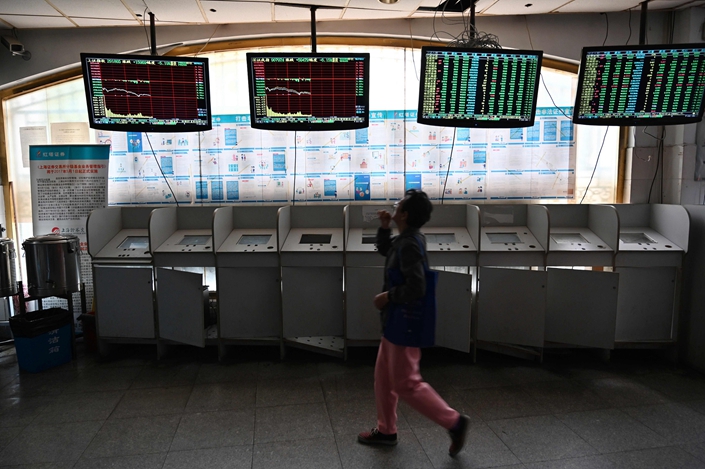 Investors monitor stock prices at a securities company in Shanghai on May 6. Photo: VCG

The benchmark Shanghai Composite Index closed up 2.22%, while the more tech-heavy Shenzhen Component Index closed up 3.84%. Hong Kong’s stock market was closed on Monday for a public holiday.

Shanghai-listed Foxconn Industrial Internet, whose Hong Kong-listed sister company FIH Mobile Ltd. makes Apple’s iPhones, rose by the daily 10% limit. Nikkei Asian Review reported in June that Apple was considering moving 15% to 30% of its production outside of China due to the country’s tensions with the U.S.

Trump agreed at the meeting not to slap threatened tariffs of up to 25% on around another $300 billion worth of Chinese imports, though the punitive tariffs that the two countries have already levied on each other’s imports remain in place.

During a news conference after the meeting with Xi on Saturday, Trump also said he would allow U.S. companies to sell equipment and components that do not pose national security issues to Chinese telecommunications giant Huawei Technologies Co. Ltd., which had previously been placed on an “Entity List” that effectively banned it from buying U.S. components.

Shares in Dawning Information Industry Co. Ltd., the listed unit of supercomputing firm Sugon, which was placed on the same Entity List in late June, also rose Monday by the 10% daily limit.

The yuan also closed 0.3% stronger against the dollar, ending the day at 6.84 yuan per dollar, the strongest level since May 10. The currency has been under pressure since April from the U.S.-China trade tensions and signs of slowing growth in the world’s second-largest economy.