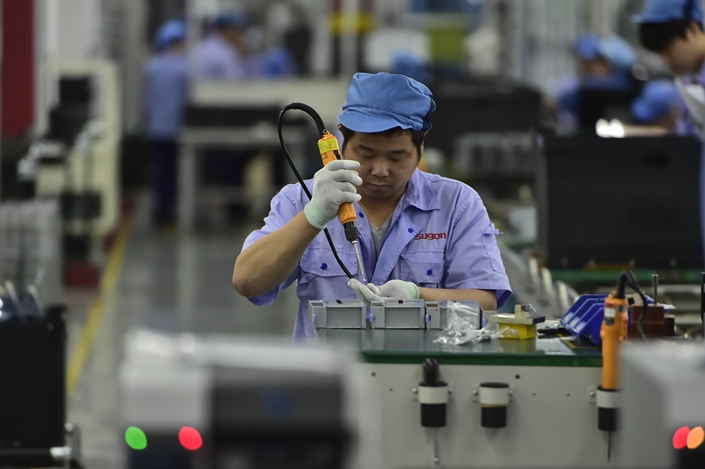 A Sugon production line in Tianjin on May 29. Photo: IC Photo

New U.S. sanctions on two leading Chinese supercomputer-makers took effect on Monday, prompting one to suspend trading of its shares, as China’s national broadcaster called the move an ineffective bargaining chip ahead of an upcoming meeting between the U.S. and Chinese presidents.

The U.S. Department of Commerce announced its latest move on Friday, targeting Chinese company Sugon and three of its affiliates, as well as the Wuxi Jiangnan Institute of Computing Technology. All five are leaders in China’s supercomputing space. The group were added to the department’s Export Administration Regulations catalog, meaning the sale of any U.S. technology, software or other high-tech products must be formally authorized by the government, amounting to an effective ban.

The move marks the second such addition of Chinese companies to the Commerce Department’s “Entity List” in the last two months. In May, the department added telecom giant Huawei Technologies to the list — an action that has severely hobbled one of the world’s leading makers of networking equipment and smartphones.

The U.S. took the move against Huawei for violating previous American sanctions against selling American-made products to Iran, though U.S. President Donald Trump has said the issue could become part of broader talks aimed at reaching a trade deal between with Beijing. The U.S. blacklisted Wuxi Jiangnan Institute, alongside Sugon and its three affiliates, over concerns that their supercomputers could be used in defense applications that could threaten U.S. national security.

“These five entities have been determined by the U.S. Government to be acting contrary to the national security or foreign policy interests of the United States,” the Commerce Department’s Bureau of Industry and Security said, according to a posting in the Federal Register dated Monday. It added that the new restrictions on the five Chinese companies would take effect Monday.

The action prompted Sugon’s listed entity, Dawning Information Industry Co. Ltd., to announce a suspension of trading of its shares on the Shanghai stock exchange on Monday, citing the U.S. action. It added the suspension would continue through July 1 at the latest.

Meantime, CGTN, the English-language channel of national state-owned broadcaster CCTV, said the Commerce Department’s latest move could be a strategic one to give the U.S. “new leverage” ahead of a planned meeting between Trump and his Chinese counterpart President Xi Jinping set to take place at the G-20 Summit in Osaka, Japan, on Friday and Saturday. The pair are expected to discuss jump-starting stalled talks for a comprehensive trade deal at the meeting.

The world’s two largest economies have been locked in Trump-led trade war for the last year, with each side imposing tit-for-tat tariffs on the other. Among other things, Trump accuses China of stealing and forcing transfers of U.S. technology, and other unfair trade practices such as strong state support for certain sectors.

“Will the new leverage work? Probably not,” CGTN wrote in an online article on the latest Commerce Department blacklistings. “China has repeatedly told the U.S. to retain some sincerity during the trade talks. But America just kept doing the opposite. Putting more Chinese organizations on the Entity List will lead the talk to nowhere,” the article said.