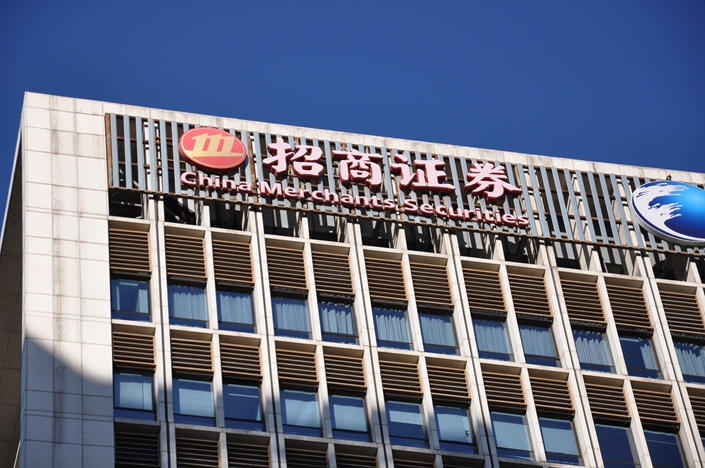 The headquarters of China Merchants Securities in Beijing in December 2017. Photo: VCG

Two of China’s major brokerages got the green light to issue a combined 10 billion yuan ($1.45 billion) in bonds, as policymakers work to counter the ripple effects in the financial system in the wake of a government takeover of a private bank.

The approvals are just the latest sign that policymakers remain concerned about distress in the interbank market after May’s takeover of Baoshang Bank, a regional lender based in northern China. The interbank market oils the daily wheels of the country’s financial system and provides much of the short-term funding for banks and nonbank financial institutions, at least one of which has failed after the Baoshang seizure because it was unable to get financing.

Shanghai-listed China Merchants Securities Co. Ltd. (link in Chinese) and Shenzhen-listed GF Securities Co. Ltd. (link in Chinese) announced on Monday and Tuesday, respectively, that they have each received approval from the central bank to issue up to 5 billion yuan in financial bonds, according to their exchange filings. Financial bonds are those issued by financial institutions established on the interbank market.

GF Securities said in a press release that it will use the proceeds from its issuance to lend to small and midsize nonbank financial institutions on the interbank market.

After issuance, the two will be able to have such bonds traded in the interbank bond market or have them listed on the exchanges, according to the announcements. The approved 5 billion yuan cap will be valid for one year from the date of approval.

The announcements of the bond issuances followed meetings among regulators, banks and brokerages last month to discuss ways to ease a liquidity crunch triggered by the seizure.

Although the central bank called the Baoshang takeover an isolated case, distrust among counterparties sparked by the incident has pushed up borrowing costs for smaller banks and nonbank institutions. In China’s financial system, funding generally flows from big state banks to smaller lenders through interbank loans, and small banks then provide financing to nonbank institutions such as funds and brokerages. But as the creditworthiness of smaller banks, brokerages and fund managers comes under pressure, the funding chain breaks down.