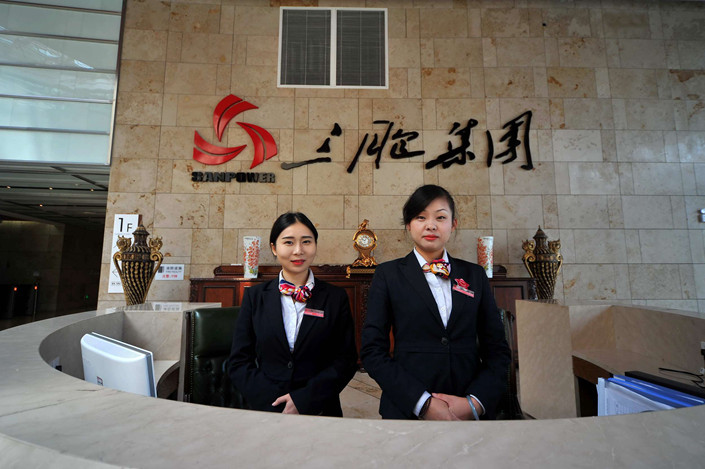 Debt-ridden conglomerate Sanpower Group Co. Ltd., which had purchased British department store chain House of Fraser, couldn’t come up with the money this week to meet investor demands to repay a bond early.

The missed payment is the latest financial blow to the indebted company, one of a handful of privately owned conglomerates in China that — along with their investors — are now paying the price for the enormous, debt-fueled overseas acquisition sprees that they went on earlier in the decade.

Sanpower, which has dabbled in businesses ranging from property to pharmaceuticals, was due to make a payment of about 603.5 million yuan ($87.7 million) on Monday, after bondholders had exercised an option in the bond contract to sell the securities back to the company before they mature, according to its exchange filing (link in Chinese).

“We have yet to make the repayment because we haven’t obtained enough funds to do so,” Sanpower’s liaison responsible for disclosing information about the bond told Caixin over the phone, adding that it has met with institutional investors about the issue.

Two institutional investors that had exercised that option told Caixin that they have yet to receive the money they are due.

Sanpower issued the five-year, 730 million yuan bond in June 2016 with a coupon rate of 6.6%. The company ran face first into financial problems last year after it had loaded up on billions in debt to finance an enormous expansion that included the purchase of Britain’s House of Fraser department store chain. Its problems were severe enough for regulators to set up a credit committee to save the debt-ridden company.

In April, Shanghai-listed electronics manufacturer Jiangsu Hongtu High Technology Co. Ltd., which Sanpower controls, was punished for falsely claiming that investors agreed to extend the repayment period for a bond that it subsequently defaulted on.

In March, Sanpower only repaid part of the principal and interest owed on a seven-year bond, according to an exchange filing (link in Chinese). Another privately raised bond issued by Sanpower, as well as two medium-term notes issued by Hongtu will mature in July.

At the end of 2018, Sanpower reported a liability-to-asset ratio of 73.31%, up 3.91 percentage points from a year earlier, according to the company’s 2018 report (link in Chinese). In 2018, its net loss attributable to shareholders widened to about 5.2 billion yuan from 121 million yuan the previous year.