By Qin Min and Isabelle Li 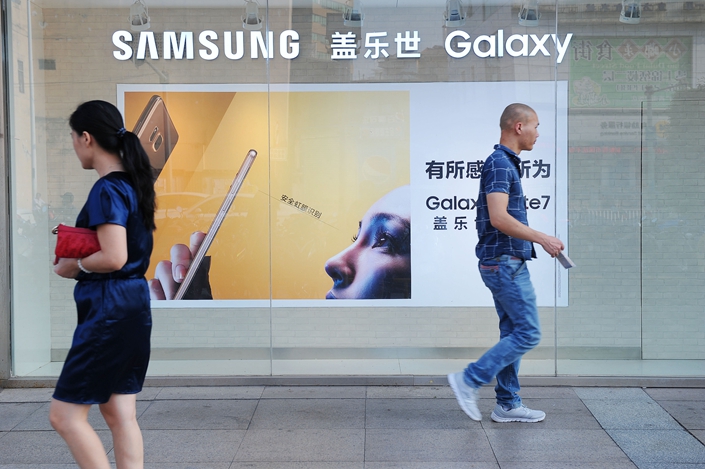 Samsung, the world’s largest smartphone-maker by shipments, restructured its China operations last month after seeing its market share in the country dwindle in recent years.

A document obtained by Caixin, which hasn’t been made public but the authenticity of which was confirmed by several internal sources who requested anonymity, details how Samsung China altered its corporate structure in early June.

According to the document, several of its regional subsidiaries have been merged — cutting the total number from 23 to 11 — including its subsidiaries in Shanghai and neighboring Jiangsu province, as well as its three units in China’s Northeast provinces of Liaoning, Heilongjiang and Jilin.

Other regional subsidiaries have new heads, the document said, while the structure and leadership of several units remains unchanged. The document says that there will now be 28 regional teams.

Samsung said that it has “recently expanded the 23 subsidiaries to 28 regional systems, instead of simply ‘cutting’ to 11 subsidiaries.”

“At the same time, to improve the sales capabilities of each region, we have appointed 11 people who have proved their competence and performance in the past as the person-in-charge for bigger regions.”

“The current structure (after the changes) is 11 subsidiaries covering 28 regions, with each one taking charge of two to three regions. For example, the Sichuan subsidiary will oversee two regional offices in Chongqing and Sichuan/Tibet, while each regional office also has its own chief,” said a source who has been working at Samsung China for many years.

“That is a de-facto consolidation,” the source said.

“Samsung’s sluggish sales in China have already made it difficult for the company to get financial support from headquarters. Now, with the consolidation plan in place, people are worried that there will be massive layoffs,” the source said.

Samsung has been facing rising costs and stiffer competition in China in the midst of a slowing global smartphone market. Global shipments by Samsung dropped 8% to 292 million units last year, according to market information provider IDC, although the company remained the largest smartphone vendor in the world.

China, once Samsung’s largest overseas smartphone market, has slid into a marginal role behind India, the U.S., Brazil, Indonesia and markets in the Middle East and Africa. The South Korean brand only accounted for 0.8% of total smartphone sales in China in 2018 with 3.3 million handsets, declining from a 20% market share in 2013.

“Right now, Samsung smartphones makes up about 1% of the overall phone market in China. In the segment for phones priced above 4,000 yuan ($582), Samsung has an around 6% market share,” said Sun Yanbiao, head of the Mobile No.1 Research Institute.

Sun told Caixin that Samsung may perform better as next-generation 5G wireless technology becomes commercially available in China. “The strength of Samsung’s industrial chain will stand out again in the coming era of 5G,” Sun said.

Samsung has also been seeking to shift part of its smartphone manufacturing capacity from China to Vietnam since 2009. Caixin reported last month that it was cutting jobs at its sole remaining China phone factory, in Huizhou, South China’s Guangdong province.