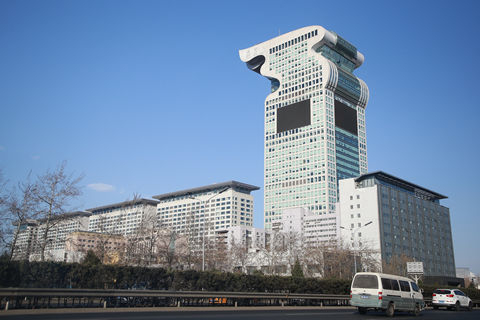 The Pangu complex is the core asset of Beijing Zenith Holdings Co., the company founded by Guo Wengui. Photo: VCG

A landmark property in Beijing owned by exiled Chinese billionaire Guo Wengui is set to be sold at auction next month to repay debt.

Pangu No. 5 office building, part of a dragon-shaped complex near the Olympic park in Beijing, will go up for auction Aug. 19. The appraised value of the office building is 7.4 billion yuan ($1.08 billion), and the starting bid was set at 5.18 billion yuan with a deposit of 1 billion yuan.

The 44-floor office building, the dragon’s head and the tallest of five buildings in the Pangu Plaza complex, is the home of corporate offices including IBM’s China headquarters, with a total area of 139,000 square meters.

The Pangu complex is the core asset of Beijing Zenith Holdings Co., the company founded by Guo, who is at the center of a series of business disputes and corruption scandals.

In 2002, after making a fortune on real estate in the central Chinese city of Zhengzhou, where Guo built the tallest building in the city at the time, he switched his business focus to Beijing and bought two parcels of land in northern Beijing near the Olympic park planned for the 2008 Olympic Games.

But payment disputes between Guo’s company and its contractor caused years of suspended construction before the Beijing government revoked Guo’s rights to the land in 2006. After lobbying efforts failed, Guo blew the whistle on the then-vice mayor of Beijing, Liu Zhihua, who was in charge of land use and Olympic projects. Guo provided authorities with a 60-minute video of Liu engaging in under-the-table dealings and extra-marital affairs, which eventually led to an investigation of the official and a suspended death sentence, sources close to the matter said.

After the fall of Liu, Guo regained the land and completed the Pangu complex in 2008 right before the Olympic Games.

Several sources said Guo got the video of Liu through help from former Deputy State Security Minister Ma Jian. The dispute over the Olympic park project showed that Guo had a successful partnership with officials like Ma, a strategy he repeatedly used to build his fortune in the following years.

Guo fled China in 2014 amid corruption investigations. Guo is now believed to be living in the U.S., where he has frequently released purportedly confidential documents of the Chinese government and corruption information on government officials to the U.S. media and through social media.

The auction of Pangu No. 5 office building is the latest in a series of disposals of Guo’s assets. Certain office spaces in the building went to auction in September 2018, with an appraisal value of 4.14 billion yuan a starting bid of 2.89 billion yuan. But the auction failed. Later, more than 40 apartment units in the Pangu complex also failed to sell at auction.

According to the auction website, no bidders submitted interest in the office building so far.

The Beijing branch of Bank of Shanghai and a Shanghai investment company are listed as applicants for the auction under a 2016 court order, according to the auction document.

This is only one of multiple billion-dollar lawsuits facing Guo’s companies in Beijing involving about 17 billion yuan of debt disputes.