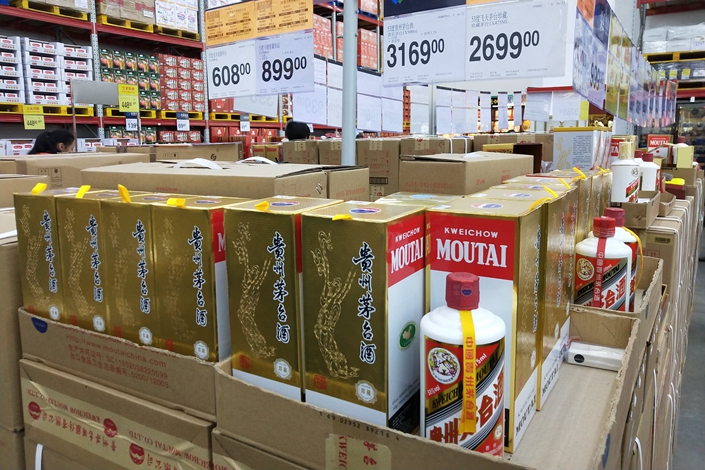 A bottle of Moutai retails for 2,699 yuan at a supermarket in Shenzhen, in South China's Guangdong province, on June 25. Photo: IC Photo

Kweichow Moutai Co. Ltd., the world’s most valuable liquor company, reported its slowest six-month sales growth in three years as it pivots to a direct-sales strategy in a bid to root out graft.

The figures reflect a slowdown compared with the same period last year, when profit grew 40% and revenue grew 38% compared with 2017.

In fact, the purveyor of several varieties of premium booze posted the slowest revenue growth across the first six months of any year since 2016, according to Bloomberg.

The disappointing sales performance comes as the company is adjusting its distribution channels to eliminate corruption, analysts said in a report by Shanghai-based Orient Securities. Since 2018, Moutai has banned some 536 dealers from selling its flagship liquor — a quarter of all intermediaries once authorized to do so. Ninety-nine dealers were culled in the first half of 2019 alone, according to the financial report.

The significant cut came as Yuan Renguo, Moutai’s chairman from 2011 to 2018, was arrested in May for taking a “massive” amount of bribes and other “severe violations of discipline and law,” according to the Central Commission for Discipline Inspection (CCDI), the country’s top disciplinary watchdog.

According to the CCDI and several sources close to the company, Yuan handed out lucrative distribution licenses in exchange for favors and bribes from government officials.

After Yuan left the company, his successor Li Baofang launched an effort to clean up its dealers. Li said at the annual shareholders meeting in May that the company won’t increase its number of dealers in the future, and will pivot the company’s distribution structure to direct sales.

The company has launched a major overhaul to increase the proportion of direct sales and reduce the number of intermediaries it uses. According to Moutai’s 2019 sales plans, 17,000 tons of liquor are assigned to dealer channels, accounting for about 55% of the total sales target, down from about 80% in 2017.

Dealers get the liquor from the factory at a set price of 969 yuan a bottle. Yet the market price tends to be much higher, exceeding 2,000 yuan in the second quarter this year. Analysts expect prices will continue to rise, according to a report by China International Capital Corp.

While Moutai’s financial report shows it had already produced 34,400 tons of the base of its flagship liquor in the first half the year — 70% of its annual target — its production for the whole year is likely to suffer due to a drought a few years ago in its home province, Southwest China’s Guizhou.

David Kirton contributed to the report.