By Liu Jiefei and Wu Xiaomeng 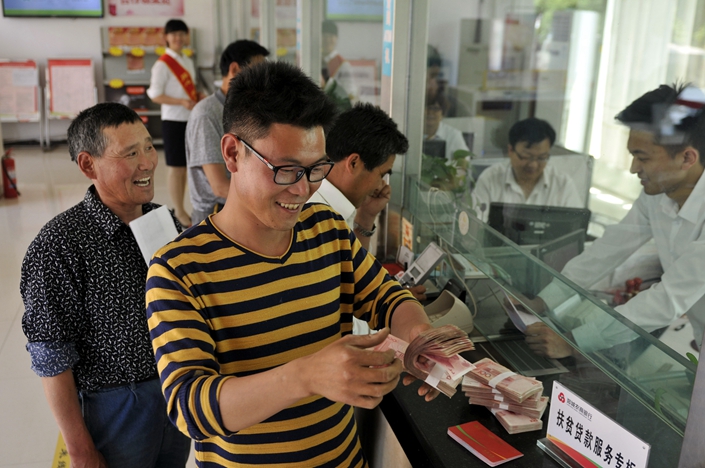 A farmer recieves a poverty alleviation loan at a bank in Linyi, Shandong province, on May 5. Photo: IC Photo

Chinese regulators have warned of a possible debt surge among underprivileged households and misappropriation of loans they get from banks, as the central government continues to encourage financial institutions to lend money to them.

An internal notice issued in May by four institutions involved in the poverty loan system — China’s banking regulator, the finance ministry, the central bank and the poverty alleviation office under the State Council — hinted at concerns over households taking on too much debt, the misappropriation of funds, and the use of such loans for non-productive purposes like bankrolling home construction and wedding ceremonies.

Small poverty-alleviation loans should be specifically issued to underprivileged households, said the notice (link in Chinese), which was finally made public on Wednesday. They also cannot be used by businesses, local government financing vehicles or other organizations.

A household is described as underprivileged if the annual average net personal income of the household is below 2,300 yuan ($334.40), indexed to 2010 levels, according to a government notice (link in Chinese) in 2014.

Small loans targeting poverty alleviation are below 50,000 yuan, and mature within three years. They don’t require collateral or a guarantee, and are mostly issued to recognized underprivileged households at the benchmark lending rates with fiscal subsidies.

Corruption and embezzlement have long marred China’s campaign to alleviate poverty. In 2016 in Jiangsu province alone, some 30.93 million yuan in poverty alleviation loans wound up in the hands of individuals and companies that were not entitled to them, according to an audit report by the province (link in Chinese) released in July 2017.

From October 2013 to June 2018, at least eight directors or deputy directors of provincial-level poverty alleviation offices were investigated (link in Chinese) for alleged corruption such as taking bribes.

By the end of April, Chinese lenders had issued a total of 562.2 billion yuan in small poverty-alleviation loans to 14.2 million households, according to data (link in Chinese) released in May by the poverty alleviation office, reported by the state-run Xinhua News Agency. At the end of last year, 46% of underprivileged households had received such loans, up significantly from 2% in 2014, the report says.

An earlier headline for this story incorrectly described the type of loans being misused. They are poverty alleviation loans.

This story has also been updated to clarify that the internal notice issued in May hinted at concerns over households taking on too much debt and the misappropriation of funds. A previous version of the story did not distinguish between the two.