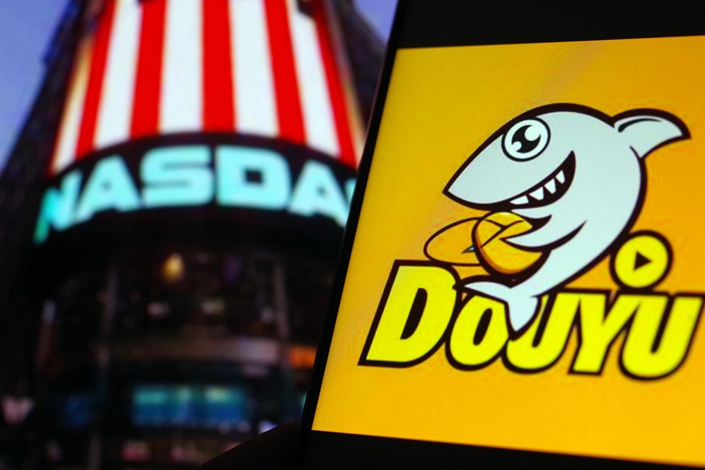 With a name that means “fighting fish” in Chinese, DouYu is valued at about $3.7 billion at the bottom of its price range. Photo: VCG

* Shares in China’s largest game-centric livestreaming platform, DouYu, ended flat in its first trading day on the Nasdaq, where the company raised $775 million

* The company and Huya are locked in head-to-head competition in a business where years of breakneck growth have begun to slow. Huya is ahead at the moment.

(Beijing) — Shares of Chinese livestreaming platform DouYu International Holdings Ltd. ended flat in its trading debut on the Nasdaq, where it raised $775 million on Wednesday.

DouYu, China’s largest game-centric livestreaming platform, ended its first day trading at $11.50, on par with its initial public offering price (IPO). The company’s shares opened 4.2% lower at $11.02 per American depositary share (ADS) before losing an additional 0.9% in the morning before recovering.

The company, based in the central Chinese city of Wuhan, said Tuesday that it sold 44.9 million ADSs at the bottom of its projected range as existing investors sold 22.5 million additional shares. Every 10 ADSs represent one ordinary share.

With a name that means “fighting fish” in Chinese, DouYu is valued at about $3.7 billion at the bottom of its price range. Its listing was the biggest for a Chinese company in U.S. since Tencent Music Entertainment Group raised $1.07 billion in December, according to Bloomberg.

DouYu’s floatation took place a little more than a year after its rival Huya Inc. went public in the U.S. in May 2018. Both companies are backed by internet giant Tencent Holdings Ltd., which is DouYu’s largest shareholder with a 40.1% stake. Tencent is Huya’s second largest, with a 31.50% stake.

The two companies are locked in head-to-head competition in a business where years of breakneck growth have begun to slow. As of December, China had 397 million livestreaming users, down by 25.33 million from the same period a year ago, according to the China Internet Network Information Center.

DouYu spent years in the red before turning things around in 2019. For the first three months of this year, it reported a net profit — its first — of 18.2 million yuan ($2.65 million) on revenue of 1.4 billion yuan, according to the IPO prospectus. The company had booked an $876 million yuan net loss for 2018.

Huya has performed better than DouYu, staying in the black since its IPO in 2018. For the first quarter of this year, Huya’s profit doubled to 63.5 million yuan on revenue of 1.6 billion yuan.

Livestreaming companies make money by taking a cut from the virtual rewards that users buy to give to livestreamers they like. For esports livestreaming, viewers go online to watch gamers compete against one another.

As China has cracked down on pirated games, the country’s livestreaming industry has come to increasingly rely on copyrighted games, according to Wang Zhi, founder of a livestreaming talent agency. That is an area dominated by Tencent, in which the two companies will have to scramble to compete in going forward, he said.