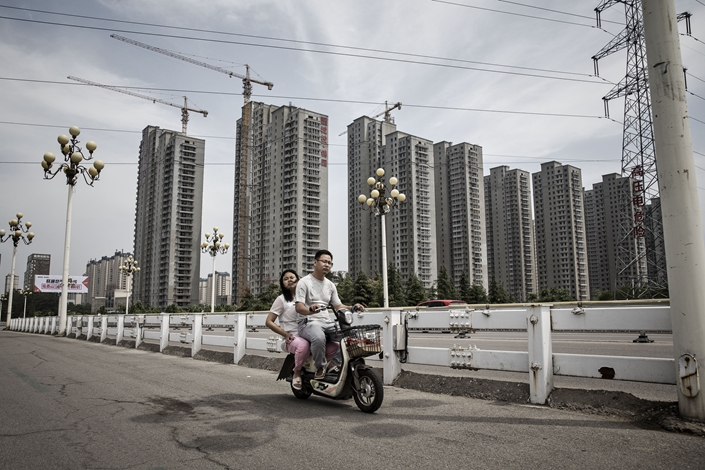 Financial regulators have issued a series of measures to curb property financing amid a reviving market. Photo: Bloomberg

Chinese regulators are rolling out additional measures to keep real estate financing in check as part of a campaign to curtail speculation in the reviving property market.

The China Banking and Insurance Regulatory Commission (CBIRC) is set to launch special inspections of 75 banks in 30 cities later this year to crack down on violations by institutions in lending to property developers and home buyers, Caixin has learned.

The inspection is likely to start with banks in Beijing. A joint-stock bank source in the capital city told Caixin that regulators are expected to arrive soon to examine banks’ property-related loans in all aspects. Banking and regulatory sources in several other regions including Zhejiang, Jiangsu, Guangdong and Sichuan said they haven’t received any order.

A CBIRC official said the plan to inspect property loans was set in the beginning of the year and won’t be changed.

The CBIRC in May issued a policy document enumerating violations in property loans, including providing off-the-books loans to fund land purchases, lending to unqualified developers and allowing homebuyer to use borrowed money for down payments, among others.

In early July, the CBIRC summoned 10 trust companies to a meeting and required them to limit the growth of property financing. In less than two weeks, the regulator again instructed 12 more trust companies to scrutinize their investments in real estate and stop illegally funding developers.

Caixin learned that some trust companies have started to pare back real estate financing to comply with the rules. Analysts said developers will face greater difficulties in obtaining financing from trust companies in the second half.

Separately, the National Development and Reform Commission issued rules to tighten controls on developers’ fundraising through bond sales. Five property companies were banned from selling any new domestic bonds, while 15 others were warned to restrict the size of offerings, Caixin learned. Meanwhile, the economic planner also told developers that any new offshore bond issues must be used only to replace medium- and long-term offshore debt maturing in the next year.

Several market sources said the tightening control on multiple financing channels in the property sector is aimed to curb the rapid rise of land and housing prices. Zhang Jiqiang, a fixed-income analyst at Huatai Securities, said the signs of revival in China’s economy in the first quarter came along with rising leverage and was largely backed by the property market.

As land sales and prices revive quickly, regulators’ concerns mounted that the market might be overheated again, Zhang said.

In the first half of 2019, the average land premium rate, which measures the increase in value after a land auction, in 300 major cities was around 20%, said Zhang Yu, an analyst with investment bank China International Capital Corp. Ltd. (CICC). Rising land prices have boosted expectations that home prices will increase, exacerbating concerns of a bubble in the market.

While tightening regulations, regulators have toughened punishment of property loan violations. In July, several banks including the Yunnan branch of the Industrial and Commercial Bank of China, the Kunming branch of Pudong Development Bank and an Inner Mongolia unit of the Bank of China were penalized for property loan-related misconduct.

CICC’s Zhang said that while recent restrictive measures issued by CBIRC and the NDRC will effectively curb loan-backed land purchases, regulators are likely to shift their focus to mortgage loans in the second half to rein in excessive borrowing through tighter quantity control or higher mortgage rates.

Zhang Xu, analyst at Everbright Securities, said the tightening measures on property financing will be maintained at least until the fourth quarter and little easing can be expected.