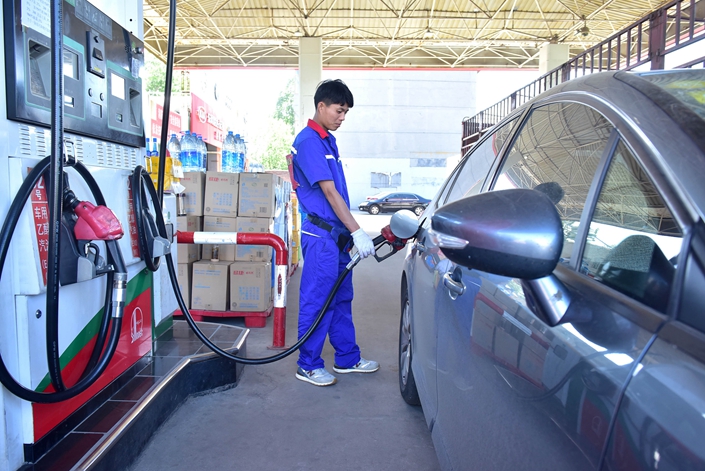 A gas station employee fills up a car in Shijiazhuang, North China's Hebei province, on May 13. Photo: VCG

Depending who you ask about oil, currently you get one of two answers. One: Mounting Middle Eastern tensions will soon send oil prices surging, crushing economies like China — the world’s biggest oil importer. Or two: Slower global economic expansion — including China — will crater oil prices, with negative global ramifications. Bad for stocks either way, pundits presume. Wrong. While oil prices will swing, you should expect little economic fallout. Here’s why: Times have changed. Oil has lost its power. Oil now has little ability to stop most major nations’ growth. Don’t let antiquated fears scare you on the economy or on stocks.

Since then the gyrations continued. Prices rebounded dramatically to start 2019 — up 48.2% at April 25’s $74.94 high, with many blaming rising tensions between America and Iran. Then oil tumbled again, with headlines seizing on slower global oil demand growth and weak manufacturing data. They claim it shows recession looms, potentially adding pressure on demand for China’s exports globally.

Those Iran fears get one thing right: The big swings are about supply, not demand. If Iran sanctions and tensions squelched supply, import-reliant China and other major economies across Asia and Europe would see costs jump. This isn’t just because China imports more Iranian oil exports than any other single country. No. Prices are set globally. If Iran successfully closed the Strait of Hormuz — as it has often threatened to do — even oil sourced nowhere near the Persian Gulf would rise. Like stocks, sentiment can sway oil prices heavily in the short run. Hence those two price jumps.

But those fretting the impact of Iranian sanctions’ should keep history in mind: We’ve seen this movie before. It doesn’t end badly. Consider a recent example. From 2012 to 2016, Europe participated in U.S.-led Iranian sanctions. Iranian oil exports to the continent plummeted. But because global oil production rose overall — thanks to producers in the U.S. and elsewhere — the fallout was minimal. Despite myriad headlines arguing otherwise, Iranian oil production doesn’t pack a global punch.

There are more reasons an Iran-driven spike won’t ding Chinese or global growth today. All tie back to one central point: productivity has reduced oil’s earlier era’s ability to punish. Pundits think somewhat like it is still the 1970s. Back then, Arab nations collaborated to embargo oil exports to Europe and America. It packed a big punch by significantly cutting supply. But Iran can’t do that. Its production is too small and the Strait of Hormuz is 20 miles too wide for Iran’s navy to close, especially with other navies watching. Consider the 1980 to 1988 Iran-Iraq war, which included many attacks on tankers. That “Tanker War” hit only about 2% of total oil traffic in the Persian Gulf. A rounding error, not a threat. Oil prices didn’t spike.

Finally, even if oil prices rise, it won’t imperil China and the global economy much. Consider the intensity of oil usage. While the West suffered from the 1970s OPEC embargoes sparking sky-high prices and worldwide shortages, Deng Xiaoping hadn’t yet launched his world-changing economic reforms opening the Middle Kingdom to world trade. Modern economies are now more interconnected and share another commonality — massively fading energy intensity.

In today’s major economies, services outweigh heavy industry and manufacturing. China has been championing this trend recently, with the government’s concentrated effort to shift from a heavy-industry, export-driven economy to services- and consumption-based growth. That goal has started to bear fruit. The Chinese service sector now composes more than half of gross domestic product (GDP) at approximately 52%. Heavy industry is around 34%. Service firms use less energy. Even manufacturing has cut energy use! Global energy intensity fell 32% from 1990 to 2015, according to the EIA. That means each hundred yuan of world GDP today takes a fraction of the oil it did 40 years ago. This saps energy prices’ ability to stymie growth.

China is also moving to improve its energy efficiency. Since announcing a plan to reduce automobiles’ oil consumption in 2015, China has been at the forefront of electric vehicle technology—a plank of the “Made in China 2025” initiative. The country’s ambitious environmental policy may also improve energy efficiency.

Economic shifts in recent decades also show why using oil demand to gauge economic growth is a folly. The fact that oil demand growth flatlined outside China, India and America last year doesn’t tell you much about the economy. It simply reflects weaker manufacturing. But buoyant services kept global growth afloat. We saw the same thing in 2015 and 2016, when oil sank as low as $26.01 per barrel — way below today’s roughly $60. Pundits feared it was a sign weak demand would infect the whole economy. Energy-heavy economies did suffer. But most of the world was fine—including China. Whether oil prices rose or fell, Chinese growth has continued. Even your slowing growth rates dust nearly all the world.

Oil’s price rollercoaster ride may continue. But don’t fear these swings. Decades-old fears over oil — whether rising or falling — just show you sentiment is low, setting up a positive surprise as economic growth persists. As this false fear falls by the wayside, the CSI 300 should benefit.