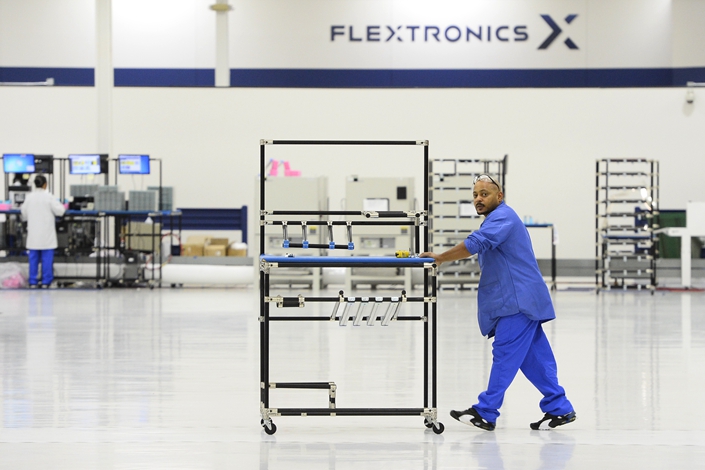 Flex operates more than 100 factories with 200,000 employees in more than 30 countries. Photo: VCG

Revathi Advaithi, CEO of Flex, made the comment during an earnings conference Thursday, as the company released its latest quarterly financial results.

“During quarter one, there was well publicized action by the U.S. government and significant geopolitical under certainty that impacted our customer Huawei,” said Advaithi.

“These actions, which were beyond our control, lead to a reduction in demand for products we assemble for them in China. And as a result of this, we're scaling down our Huawei-dedicated operations in China,” he said, adding that the change was “unfortunate” given the two companies’ “longstanding and successful partnership.”

But Caixin can reveal the relationship between the two companies has been patchy of late. Huawei is currently taking legal action against Flex, alleging the U.S. company refused to return production material held in one of its China factories.

The spat began in late May when Huawei sent nearly 100 trucks to a Flex factory in the Guangdong province city of Zhuhai, demanding the return of the material, Caixin understands. A source close to Huawei said Flex returned only a small portion of the material.

After more than a month of negotiations Flex returned more of the material but has retained some either in the Zhuhai factory, or in overseas facilities, Caixin has been told. Flex did not respond to requests for comment.

Huawei is one of Flex’s most important clients in China. It assembles devices including smartphones and laptops for the Chinese company. It joins a growing number of U.S. corporations that have announced they would pare back business with Huawei.

The Chinese company faces a series of major challenges from the U.S. government that threaten its ability to produce many of its core networking and smartphone products. The current clash stems from Washington’s determination that Huawei illegally sold American-made products to Iran in the past, violating U.S. sanctions at that time.

In May, Washington placed Huawei on a blacklist effectively banning it from accessing many U.S. suppliers. But the White House has softened recently as trade war tensions ease, and earlier this month it said it will again begin allowing shipments of U.S. products to Huawei if those products pose no national security threat.

Earlier this month, Caixin revealed that a Flex facility in China making smartphones for Huawei had halted production just a year after starting up. Located in the Central China city of Changsha, the facility had started production in July 2018, but met unspecified difficulties earlier this year.

Flex, a rival of Taiwan giant Foxconn, operates more than 100 factories with 200,000 employees in more than 30 countries. The company entered China in 1987, and has built domestic facilities in cities including Zhuhai, Suzhou and Shenzhen.

For the quarter through June, Flex saw its revenue drop 3.5% to $6.2 billion, though profits rose 11% to $208 million. Advaithi blamed slowing demand in markets like China and India for the poor quarterly revenue performance.