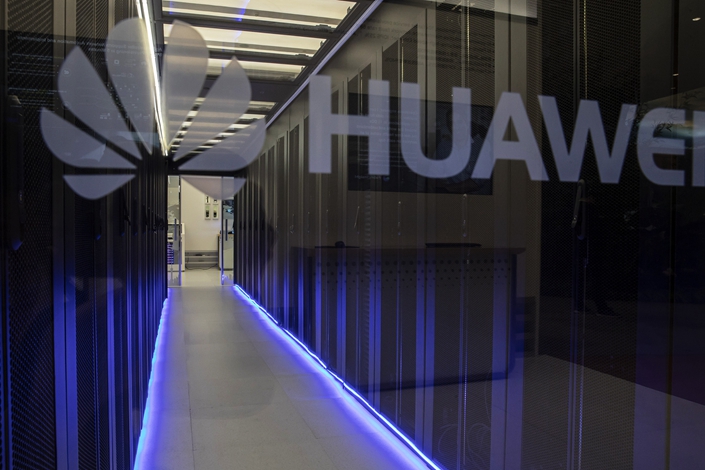 Huawei's headquarters in the southern city of Shenzhen on March 6. Photo: VCG

A factory in the central city of Changsha that makes smartphones for embattled telecom giant Huawei has halted production just a year after starting up, several sources close to the project told Caixin.

The facility operated by U.S. contract manufacturing giant Flex Ltd. had started production in July 2018, but began running into unspecified difficulties earlier this year, said a source close to the industrial park where the project is located. “From this March, the first stage of Flex’s manufacturing program began to experience difficulties,” the source said. “As early as May, Flextronics had already halted production,” he told Caixin without giving details.

Flex did not immediately reply to an email seeking comment.

The halt in production would come as Huawei Technologies Co. Ltd. faces a series of major challenges from Washington that threaten its ability to produce many of its core networking and smartphone products. The current clash stems from Washington’s determination that Huawei illegally sold American-made products to Iran in the past, violating U.S. sanctions at that time.

In December, Huawei’s chief financial officer was detained in Canada on an extradition request from the U.S. related to the case. And in May, Washington cut off Huawei from the company’s many U.S. suppliers as punishment. Washington has relented more recently as tensions ease in its trade war with China, and earlier this week it said it will again begin allowing shipment of U.S. products to Huawei if those products pose no national security threat.

Before the U.S. announced the resumption of some sales, Huawei had said it expected to lose around $30 billion in sales over the next two years related to the ban.

The source close to the industrial park where Flex was making Huawei smartphones said the plant had “been limited by the U.S. restriction order, putting the Flex facility under a major attack.” A person in charge of hiring for the facility said even though production was halted, a few employees were remaining to maintain basic operations.

The plant is one of many for Flex, previously known as Flextronics, which competes with Taiwan giant Foxconn and currently has more than 100 factories with 200,000 employees in more than 30 countries. The company first came to China in 1987, and has other domestic facilities in cities including Zhuhai, Suzhou and Shenzhen.

The Huawei smartphones were being produced in the first phase of a massive three-stage project being developed by Flex that was meant to have total investment of 5 billion yuan ($727 million). On completion, the complex was designed to have annual capacity for products worth 10 billion yuan. Production began in July 2018 in the first phase, which was making the Huawei phones.

But now Flex could be considering abandoning the project, according to the source close to the economic zone where it is located. “Who will take over the first stage of the project still hasn’t been decided,” the source said. “At the moment Flex is considering leaving Changsha, but it hasn’t made a final decision yet.”