By Zhang Erchi and Jason Tan 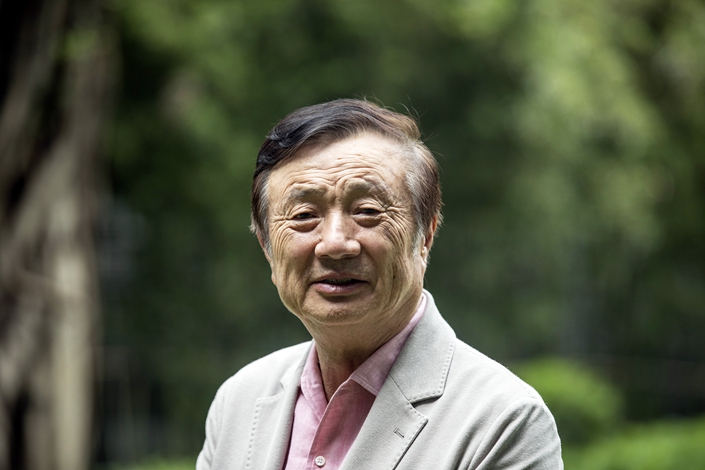 Huawei founder Ren Zhengfei wants to break his company’s dependence on U.S. suppliers — or at least that was his position before U.S. President Donald Trump unexpectedly announced over the weekend that the Chinese tech giant would be removed from a list barring it from buying U.S. components without permission.

In an exclusive interview published Saturday by a Canadian newspaper, Ren said Huawei Technologies Co. Ltd. has added 6,000 people to its 80,000-strong development team this year and aims to end its dependence on U.S. suppliers “within two years.”

The company’s workers have been given a single directive, the Globe and Mail reported, which is to strip out anything from the U.S. across the company’s sprawling product lines, so that Huawei “will no longer face a threat to our survival,” Ren said.

Over the weekend, Trump said on the sidelines of the G-20 Leaders’ Summit in Osaka, Japan, that he would allow U.S. companies to resume selling to Huawei, and that both Beijing and Washington have agreed to resume stalled trade talks.

Citing risks of spying for Beijing, the U.S. government in May placed Huawei on an export blacklist that effectively banned the Chinese company doing from business with U.S. companies from chipmaker Qualcomm to Alphabet Inc.’s Google. That move threatened Huawei’s aspiration to become a leader in next-generation wireless technology 5G, as well as its goal to become the world’s largest smartphone-maker by the end of this year.

In the interview with the Globe, Ren said he didn’t think the U.S. would remove Huawei from the Entity List. “They have added Huawei to the list not because we have done something wrong and need to be punished, but because they want to wipe us out. If someone wants to condemn you, they can always trump up a charge,” he said.

Trump didn’t elaborate on the lifting of the ban, but said he was only referring to equipment that “did not present national security issues.”

Read More
In Depth: How Huawei Prepared for American Sanctions

Ren acknowledged that it would not be easy to wean his company off U.S. technology. The biggest problems lie in unexpected areas. “If some small, apparently minor component is missing on your circuit board, you may have to redesign the entire board,” he was quoted as saying. “And that involves quite a workload.”

Ren pitched Canada on working more closely with Huawei on 5G to give Ottawa a chance to get a step ahead of Washington. “The biggest weakness for Canada is that while you have very bright people, you don’t have enough people,” Ren was quoted as saying.

Proponents of 5G say it can facilitate the wider deployment of artificial intelligence in a way that will greatly increase worker productivity, the Globe reported.

By installing 5G, “it’s very likely investors from other parts of the world would swarm to Canada,” Ren said, predicting that Canada would “become an industrial power with an equivalent population of 300 million.”

Ren also rebuked Canada’s leaders, saying they had been foolish not to rebuff the U.S. request to extradite his daughter Meng Wanzhou. “Maybe some other countries are smarter in rejecting U.S. extradition requests,” he said.

Meng, who is Huawei’s chief financial officer, was arrested in December in Vancouver at the request of the U.S. over alleged fraud in connection with U.S. sanctions on Iran. She is out on $7.46 million bail in Vancouver, facing an extradition hearing scheduled to begin in January.

Ren urged Canadian Justice Minister David Lametti to use his power to intervene and free Meng, but the Globe said Canadian Foreign Affairs Minister Chrystia Freeland has rejected the idea.