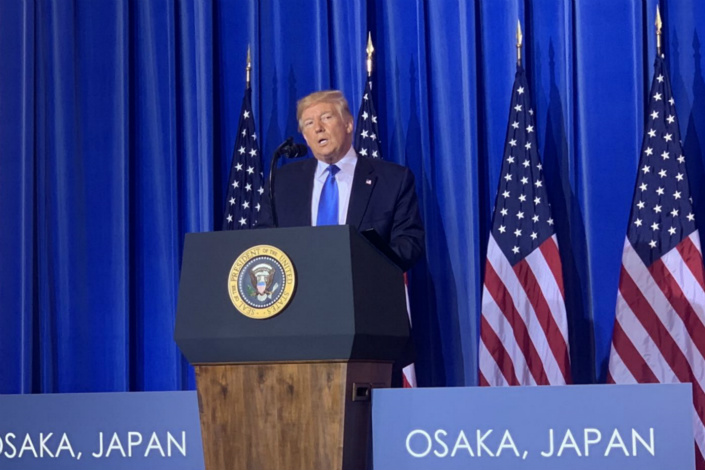 (Osaka) -- U.S. President Donald Trump said Saturday he would allow U.S. companies to sell products to Huawei, a month after the Chinese telecom giant was blacklisted for security reasons.

“U.S. companies can sell their equipment to Huawei,” Trump said at a news conference after meeting with Chinese President Xi Jinping on the sidelines of the G-20 Leaders’ Summit in Osaka, Japan, adding that he was talking about equipment that did not present national security issues.

Wang Xiaolong, the special envoy of G20 affairs of the Chinese Foreign Ministry, commented later that China “certainly welcomes“ Trump’s remarks on Huawei, “if the U.S. can commit to its words.”

“Huawei is a private business, and it is a world leader in information technology. There is a positive impact wherever such a company invests or participates in local development,” Wang said.

Removing the sanctions on Huawei was reportedly one of the top priorities for China in talks with the U.S., in addition to the demand to drop the existing tariffs on $250 billion worth of Chinese products, according to a report of the Wall Street Journal.

In May, the U.S. government put Huawei Technologies Co. Ltd on a so-called entity list, in effect banning U.S. companies from selling software or hardware to the world’s largest telecom equipment maker.

U.S. companies provide more than one-third of Huawei’s components. Although Huawei said it had a large stock of components that would allow it to continue producing telecom devices and smartphones, it later admitted that the blacklisting could cost it $30 billion in sales revenue over the next two years.

The Chinese government in late May also announced a plan to create its own blacklist that would ban U.S. companies that cut supplies to Chinese companies or jeopardize Chinese national interests.

U.S. tech companies have reportedly been lobbying the White House, trying to resume their business ties with Huawei.

Some of the companies, including chip maker Micron Technology Inc. and Intel Corp., have recently resumed selling some products to Huawei after they discovered a legal loophole if such products are not made in the U.S., according to a Bloomberg report on Thursday.