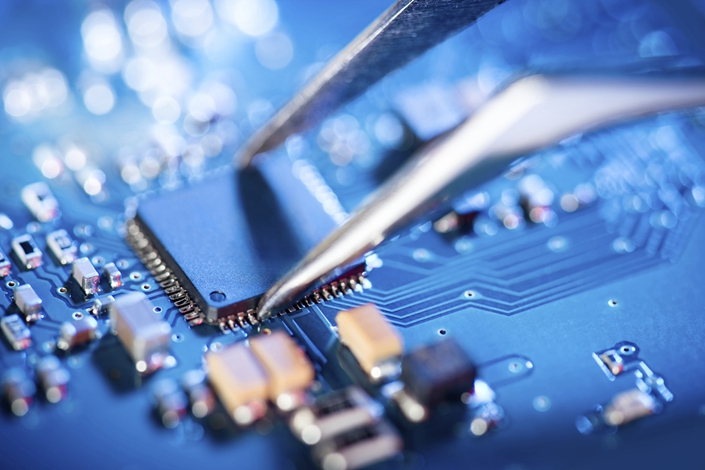 A team of Chinese and international scientists has taken a significant step toward demonstrating the potential of such hybrid “Neuromorphic” chips by using one they developed to run an autonomous bicycle. Photo: VCG

For years, researchers pursuing the holy grail of artificial general intelligence have typically gone down one of two routes: approaches grounded in computer science, and those rooted in the science of the brain.

But there’s increasing interest in a third way. “Neuromorphic” chips take a neural network — a set of algorithms loosely modeled on the human brain — and place them inside traditional computer architecture.

Now, a team of Chinese and international scientists has taken a significant step toward demonstrating the potential of such hybrid chips by using one they developed to run an autonomous bicycle.

The voice-activated, self-balancing two-wheeler can detect and avoid obstacles, according to their findings, which were published in British peer-reviewed journal Nature this week.

The chip, called Tianjic, is about an inch-and-a-half square and can flip between a number of existing architectures to accommodate both the kind of machine-learning algorithms known to computer scientists, and the circuits modeled on animal brains familiar to neuroscientists.

The researchers programmed Tianjic before testing the bicycle. They then gave it a series of commands that required the chip to simultaneously run information through the networks, including detecting objects in real time, avoiding obstacles, recognizing voice commands, and driving over a speed bump. The bike completed its tasks with relative ease.

Shi Luping, a professor at Beijing’s Tsinghua University who is the corresponding author of the study, declined Caixin’s request for comment.

However, Vera Chung, a computer science professor at the University of Sydney who is not connected with the research, said while this was not the first time a neural network has been combined with a microchip, the bicycle application was a first.

Chung said it was a smart decision to road-test this technology on a bicycle before trying it elsewhere. “This chip can be applied to many other applications such as … simple vehicles, drones and robots to deliver goods and services.”

Tianjic’s creators are not the first to experiment with neuromorphic technology. Apple’s iPhone X, for example, makes use of a brain-mimicking module embedded in its main chip to power the camera’s portrait mode and facial-recognition unlocking system. And the research arms of American tech giants Intel and IBM are also developing neuromorphic chips and devices, according to the companies’ websites.

Although robots can use existing AI technology to accomplish certain tasks with human- or near-human ease, their skills remain limited to particular contexts and training them is time-consuming and inefficient.

Scientists hope that neuromorphic chips will help grant machines more autonomy and flexibility. With hundreds of thousands of “neurons” that, like those of their organic counterparts, “spike” when input signals exceed a certain threshold, chips like Tianjic could help machines master complex tasks more quickly and efficiently.

Chung expects to see more technology like this coming out of China in the future. “Chinese research is now more focused on software algorithms, (whereas) previously it was more focused on hardware, as the U.S. has tried to limit supply for chips to China since the Huawei incident,” she said, referring to ongoing American suspicions that the telecom giant poses a national security risk.

“It looks like the Chinese government will spend more on hardware development funding in the next 10 to 20 years,” Chung said.

Artificial general intelligence is frequently defined as the ability to manipulate abstract information — unlike the related term, “artificial intelligence,” which often refers to technology that mimics the complex thinking patterns of intelligent beings. However, scientists disagree on the exact definition of both concepts.