By Isabelle Li and Wang Zili 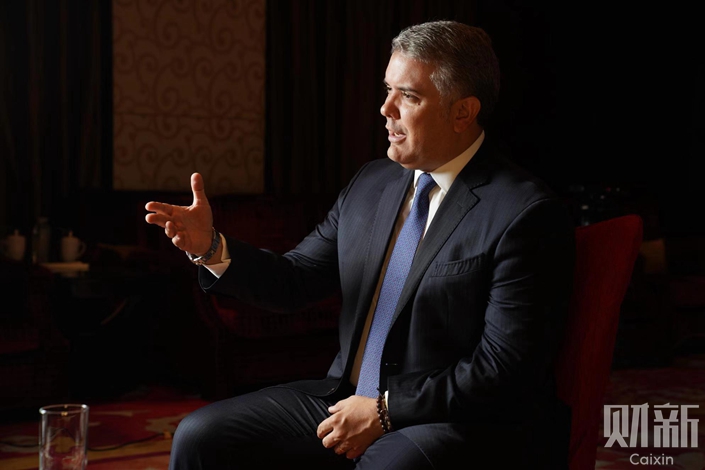 About one year after taking office, Colombia’s President Iván Duque Márquez this week made his first state visit to China, first arriving in Shanghai Sunday and then meeting with President Xi Jinping in Beijing on Wednesday.

China is now Colombia’s second-largest trading partner, after the U.S. In 2018, bilateral trade grew 29% to reach $14.6 billion. However, of Colombia’s $4 billion worth of exports to China, 85% was oil. “We have to diversify the exports basket … I think that’s very important,” Duque told Caixin in an exclusive interview in Beijing on Tuesday.

“We have also the technology, (and) the creative economy. We have fintech, health tech. We have a country that is becoming the center of information in Latin America. I always say it’s going to be the Silicon Valley of Latin America. We’re getting there,” the 43-year-old leader said.

Duque, a graduate of Washington D.C.’s Georgetown University and a 12-year veteran of the U.S.-based Inter-American Development Bank, described his hopes for the two countries’ business and economic ties.

“Colombia is open for business. Colombia is a land of opportunity,” Duque told Caixin, stressing that he would like Colombia to be “the golden gate” for Chinese people who want to go to Latin America.

According to the official Xinhua News Agency, Duque told the Chinese president he hoped to further step up bilateral ties and cooperation in areas including trade, energy, infrastructure construction, connectivity, the digital economy and creative industries.

The following are excerpts from Caixin’s interview with President Duque. They have been edited for length and clarity.

Caixin: This is your first state visit to China. How has your trip been so far?

President Duque: Well, I'm very happy, because I have been able not only to share the vision that we have for Colombia, but also to (…) call on Chinese investors and promote Colombian products in China.

Actually, today there was a business (deal) that was closed by the banana sector from Colombia. $40 million of banana exports will come to China that will make bananas the number one agricultural export to the Chinese market.

We're also signing a protocol for (...) access to avocados from Colombia, which is going to have a tremendous impact.

I was able to talk with Shanghai's Communist Party secretary, with Secretary Li (Qiang), about the convenience and importance of having a direct flight from Shanghai to Bogota. So we look forward that to become a reality.

I think so far the trip has been very productive. And I think it has also been productive for the Chinese investors that wanted to know more about Colombia and about the open opportunities that we have in our country.

I think the bilateral trade has been increasing over the years. We have now more than $4 billion in exports, but we definitely have to address (the fact) that 85% is oil, and when we look at non-traditional exports (they) were less than $250 million. So, we have to diversify the export basket. We want to diversify it. We're trying to make a big portion of our products. And I think that's very important.

Colombia has a relatively transparent bidding system. Now that the U.S. government seems hesitant to see Chinese investors win contracts in other countries, what prospects do you think Chinese companies have if they are willing to invest in Colombia, a strong U.S. ally?

So what I can tell them is that we will guarantee not only that they will always be treated fairly but we will have a transparent bidding system. So they can play an active role in the economy and we want to see more Chinese companies putting their offices in Colombia, and actually I was very happy because I was the author of the bill for electric cars, which I'm about to sign next week.

Talking about technology, many tech companies from China are exploring overseas business opportunities. What does Colombia have to offer?

Well, Colombia has (…) a new piece of legislation for the telecom sector, and we want to get to 70% coverage of fast speed internet by the year 2022. We're also about to have the bidding for the 700 megahertz band in Colombia. We're in renewables. We're in electric vehicles. We're in the fourth industrial revolution. So I think Colombia has become a place where entrepreneurship is getting bigger and bigger.

Yesterday I was with Liulishuo (a language learning startup) in Shanghai. Now they have millions of people learning English with their platform in China. I said it will be interesting if your platform can be brought into Spanish, so that (…) more citizens in a country like Colombia are able to learn English. Those are the kinds of globalization opportunities. And yes, I want to be a daily promoter of that kind of alliance.

You mentioned telecom. Now that 5G technology has become a new area of competition, especially between China and the U.S. China's Huawei and ZTE have been sanctioned by the U.S. What do you think of this?

5G is my goal, we want to get Colombia to 5G by the end of 2022. There's an open debate (…) about the usage of data. Who owns the data? Who manages the data? What are the ethics behind data management? And you know, the debate now can be between Huawei and the United States or can be about China and someone else.

But I think the essence is not about countries fighting companies. If you are approaching 5G technology, I think it's all about (…) having the right regulation and the ethics to know who controls the data, who uses the data, for what purposes (they) use the data.

So is Colombia going to open its door to Chinese companies in terms of 5G?

I have always said this clearly. Colombia is open to having investors from all over the world that comply with our legislation and our constitution, and they will be treated fairly, because we want to have an open competition that can help us improve the quality of life.

Some countries have security concerns over foreign investment. What about Colombia?

And yes, I want to see more Chinese investors coming to Colombia, not only on the industry and in services, but also in the capital markets. I think we're about to make a very important reform that is going to make our capital markets more modern.

China has invited many Latin American countries to take part in the Belt and Road Initiative, and many have already signed MOUs with China. Will Colombia be the next?

I think the Belt and Road Initiative is very interesting. I think it represents a diplomatic approach from President Xi.

… I’m thinking about a China-Colombia initiative that will be the broader umbrella, and then having the exchange of ideas. We could approach the Belt and Road Initiative, but I wanted to put it into that big umbrella of the Chinese-Columbia initiative, because it is not only about investment, but also about having the Chinese core companies participating actively in key projects in Colombia.

I know you’ve written a book on the “orange economy,” the creative economy. In this area, are there any opportunities for China and Colombia to cooperate?

Yes, I think the creative economy is getting bigger and bigger in China day by day. And it’s not only movies, it’s also design. (It’s) also museums, is also theater, is also dances, is also digital animation.

So the orange economy is very big in China. And I think there are a lot of things to be learned in Columbia about the policies that you have embraced, but also being able to open the market for co-production, co-distribution and having content development in Colombia that can be suitable for the Chinese market, this is something that is a priority to us.

Also for the Chinese tourists. You know, we only had 15,000 Chinese visitors last year. (It’s a) very small number compared with the size of the tourists that you have throughout the world. So what would I tell them? Colombia has beaches, has mountains, has eco-tourism. Colombia has 59 national parks. … Colombia has beautiful sights, great music, a great history and tradition. So when I can look into the eyes of the Chinese people, I just want to tell them heart to heart that if they want to go to Latin America, we want Colombia to be the golden gate for them to access our beautiful continent.

You talked a lot about intraregional trade. Why?

How do you see the latest wave of protectionism led by the U.S.?

So I think we all want that the negotiations for the free trade agreement between the United States and China can take place, because it’s the best for the world, and it is the best to have the global economy growing even faster. And by that helping developing economies also to grow and close the gaps.

Xu Heqian contributed to this report.