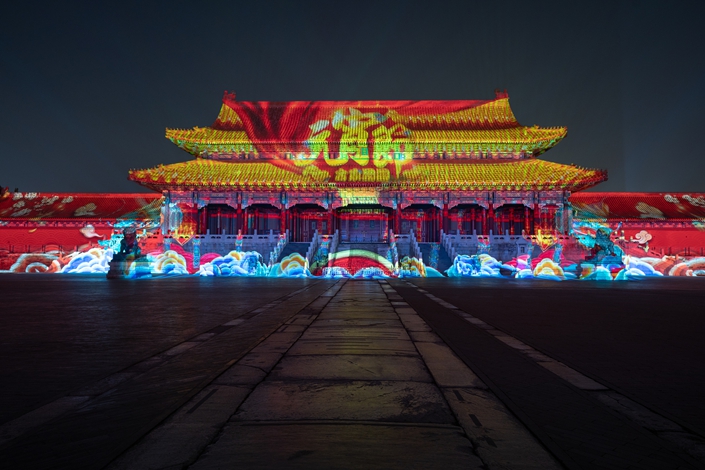 A building in Beijing's Forbidden City is lit up during the Lunar New Year holiday in February. The light show was reportedly assisted by Appotronics. Photo: VCG

An intellectual property battle continues to embroil one of the first companies to list on China’s high-tech board.

STAR Market-listed mainland electronics manufacturer Appotronics Co. Ltd. is countersuing its Taiwan-based rival and attempting to void its patents in the latest escalation of a heated cross-Strait intellectual property dispute.

On July 29, Appotronics became the first company listed on the board — which was established to attract innovative companies — to be sued for patent infringement when Taiwan’s Delta Electronics Inc. filed proceedings in a Guangzhou court.

Delta said an Appotronics projector model infringed three of its patents, according to a statement (link in Chinese) filed by Appotronics to the Shenzhen Stock Exchange.

Delta demanded Appotronics stop manufacturing and selling the product and cough up 48.4 million yuan ($6.9 million) in compensation — almost three-quarters of the company’s net profits for the first half of the year.

The dispute follows Beijing’s efforts to strengthen intellectual property (IP) protections as a way to cultivate local innovation. Appotronics is the first firm vying for fundraising on China’s new high-tech board to be sued for patent infringement. The company has long claimed its high number of IP holdings as its main strength.

Tang Xiangyang, a lawyer at Guangzhou-based Yingke Law Firm, said patent suits such as these could be used by companies to put pressure on each other and even drive their rivals out of the market.

He said it was worth following whether one of the companies would file an injunction that would prevent the other from manufacturing and selling its products on the mainland.

Founded in 2006, Appotronics mainly engages in manufacturing and sales of laser display screens and related components. The company booked profits of 177 million yuan in 2018 on revenue of 1.4 billion yuan, according to its prospectus.

Founded in 1971, Delta manufactures and sells video display products and telecom power systems. Delta reported revenue of more than 50 billion yuan in 2018, according to the company’s financial report.