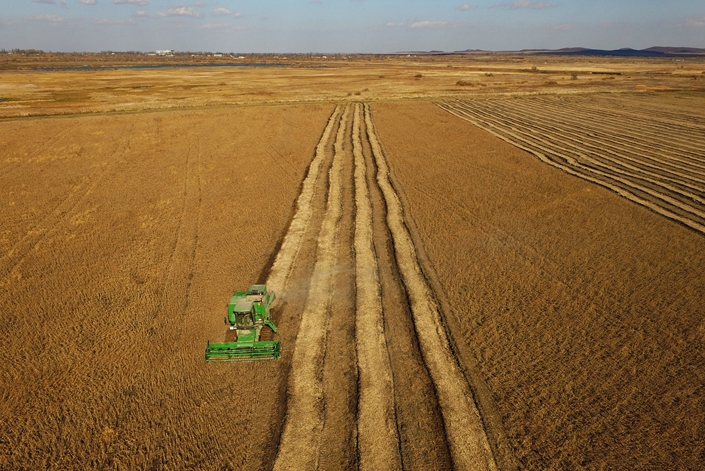 A harvester collects soybeans on a farm in Primorsky Krai, Russia, in October 2016. Photo: VCG

Chinese farmers are going to Russia to grow soybeans for sale in their home market as China increases imports from its northern neighbor amid a worsening trade war with the U.S.

The farmers’ foray into Russia reflects how China is broadening its soybean supply to feed its mammoth appetite now that it has curtailed imports from the U.S., one of its top sources of the oilseed. China, the world’s top soybean importer, consumes an average of 110 million tons of soybeans a year, but only produces around 16 million tons domestically, according to data from the Ministry of Agriculture and Rural Affairs.

“Expanding soybean imports from Russia is a major agreement reached by the leaders of China and Russia,” Gao Feng, a spokesperson of the Ministry of Commerce said at a briefing (link in Chinese) on Thursday. China imported more than 800,000 tons of soybeans from Russia in 2018, up 64.7% year-on-year, Gao said.

China’s soybean imports from the U.S. have tumbled since July 2018, when the tariff war began. Last year, China’s imports of U.S. soybeans plunged about 49.4% to 16.64 million tons, according to data from China’s General Administration of Customs.

On July 25, China’s customs administration began (link in Chinese) allowing soybean imports from all parts of Russia, expanding from just five regions in eastern Russia near the border with China.

In the past, Russia has typically been an importer rather than an exporter of soybeans, a person close to the agriculture ministry told Caixin. Over the past few years, soybeans from Russia have been mainly produced by Chinese farmers and companies who send their crops back to China, the person said.

A total of 20 Chinese soybean companies had made investments in Russia, according to a report (link in Chinese) published in November by the agriculture ministry’s Foreign Economic Cooperation Center. There are mainly two types: small and midsize companies involved in farming and basic processing, and large private or state-owned companies that focus on investing in Russian infrastructure like piers and warehouses, the report said.

It’s common for farmers to lease land to grow soybeans in Russia, but not everyone has profited, according to several soybean farmers in Northeast China’s Heilongjiang province, one of the country’s major soybean producing regions.

Gai Yongfeng, a farmer in an agricultural machinery cooperative in the border city of Heihe, has rented 500 hectares (1,235.5 acres) of land to grow soybeans on in the city of Blagoveshchensk on the other side of the border. He pays 300 yuan ($42.60) per hectare per year for the land.

Gai told Caixin that rent costs in China have been rising over the past few years, adding to the financial risk for farmers. In Heilongjiang, annual farmland rent ranges from 5,000 yuan to 6,500 yuan per hectare, depending on the quality of the land.

“I go to Russia to grow soybeans in the morning, and can come back in the afternoon,” Gai said.

However, even though land is cheaper to rent in Russia, soybean farmers have to bring their own agricultural machinery and technical staff due to different growing conditions, Gai said. Most have an uncertain attitude about farming in Russia and see their current efforts as an experiment, he said.